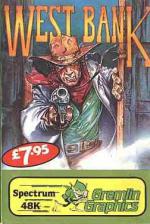 Gremlin Graphics have acquired the English rights for yet another game written by the Spanish software house Dinamic. (Remember Rocco?) In West Bank you take on the defence of a Wild West branch of a bank. Your task is to prevent a whole range of baddies from robbing the bank while letting the nice guys in town leave their money safely with your employers.

The bank has twelve doors in all, though only three doors at a time are displayed on screen this three-door 'window' can be scrolled left or right during quiet moments, when all three doors are closed. The aim of the game is to allow the good guys (and gal) to deposit loot in the bank: each of the nine phases of the working day lasts until some money has been deposited by a customer through each door. The doors swing open at random intervals to reveal either an honest customer clutching a bag of money or a baddie, intent on pumping you full of lead.

Understandably, the bank manager is not too keen on having his customers blown away shooting an innocent depositor results in the loss of two lives, one of which is yours. On the other hand, if a baddie is allowed to stand on the threshold for too long, he loses off a shot, the screen goes black and "BANG" appears in blood red. He got you. To complicate matters further, not all the baddies are out and out wicked. Julius the dandy, for instance may deposit some money or he may pull a gun on you.

Shooting the baddies who draw a gun on you before they've got a gun in their hand is simply not cricket old boy and once again two lives are lost. Now and again one of the honest citizens will appear at an open doorway, only to be robbed and replaced by one of the bad guys and if you don't watch out...

There's also a comedian for a customer Bowie the dwarf. Bowie appears in an open doorway with seven hats piled on his head. To join in his joke you need to shoot his hats away the seventh hat reveals either a bag of money, which he'll pay in if you shoot it, or a bomb which blows everyone to kingdom come if a bullet bounces off it, At the bottom of the screen, a dollar meter clocks up how much money has been paid into the bank so far giving a measure of your ability as security guard. Bonus dollars are added for shooting the bad guys and for each hat shot off Bowie's head. To the right of the cash register is the display which shows how many lives you have remaining. The goodies and baddies are reincarnated each time they're shot indeed they must all be triplets, for the same character can appear simultaneously in all three doorways.

At the start of each phase of the day, there are twelve empty boxes at the top of the screen, numbered according to the doors of the bank. A red cursor straddles three of the boxes to let you know which three portals you are currently defending. A little rolling window above the middle door registers the arrival of money as a door closes behind a depositor, and the box corresponding to the door though which the cash was paid displays a dollar sign when some cash has arrived.

When all twelve doors have been used to pay in cash and the row of boxes is full of dollar signs, it's time to earn a little bounty money in a shootout with three bad guys on the bonus screen. The display changes and it's a good old fashioned three on one shoot out. A counter decrements to zero and the three guys draw guns the quicker you shoot them the more bounty you win, but remember: shooting a chap who hasn't got a gun in his hand loses you a life. As the baddies turn up their toes to reveal the soles of their shoes, your score appears in the air above their corpses if you're really quick on the draw "EXTRA" appears above a vanquished lawbreaker to indicate that you have won an extra life.

At the beginning of the game it's possible to choose what time to clock on for work you can begin at phase 1, 3 or 6 of the nine phase day and, true to life, the further into a day's work you get, the harder it is. Phases 8 and 9 are overtime it's dark outside and the doors open to reveal shadowy figures against a blue background. Dangerous times indeed. No wonder they invented the Autobank.

Espanola por favor! this is a great little game! Despite the instructions on my copy being in the language of senoritas and bullfighters, I managed to get into it quite quickly. The graphics are big (I mean big), very western like and pleasing. The action required on level 6 is fast and furious - thank heaven for fast key responses. All you budding Billy the Kids had better mosie on down to the gen'ral store and pick up a copy of this one!

I liked West Bank It's simple and straightforward but nicely presented and addictive to play. The characters are nicely drawn and there's enough variety and surprise elements in the game to keep you on your toes for a long while - no matter how much you practice there's always going to be room for improvement. Lots of fun, and ideal for sharpening reactions.

This is a funny sort of game which involves some very repetitive action but is highly addictive and enjoyable nevertheless. West Bank requires some pretty neat finger work and gets incredibly fast and furious on later levels. The characters are massive and excellently animated and the scrolling, although blocky, is fast. The whole game has a great atmosphere as you wait to see what is revealed when the door opens - will it be someone who draws a gun or just a harmless li'l lady...?

It's a change to play something nice and mindless rather than having to wade through reams of instructions before being able to get started.

The whole game has a great atmosphere as you wait to see what is revealed when the door opens... will it be someone who draws a gun or just a harmless li'l lady?