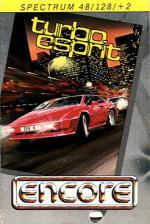 I can remember when this was released. What a product it was! And for its time! A masterpiece! What? What do you mean, some of you only got a Spectrum recently and have no idea what it's about? You want me to tell you as well, oh the cheek of it! Still, I like you face, so here goes.

You are an undercover cop. and you have been informed of a drug delivery that's going to take place in your town (one of four, you get to choose at the start!). The story is, an armoured car is going to pop in, make four deliveries to four drug cars, and then scarper. You have to intercept the drug cars AFTER they have collected the deliveries, and then get the armoured car. The trick is, don't be seen, because once you do, all the cars will do a runner and you'll be left with egg on your face.

The graphics are fast and smooth. All the cars are well drawn, and the little people that walk around the streets are sweet and cute. Sound is limited to a beep and a squeak, though the title tune is great.

One of the best games ever released, in my opinion, and if you don't buy it, then you're one hell of a mug.

One of the fabbiest ever Spectrum car racing, drug busting, crime fighting games, and it doesn't even scroll round corners!

One of the best games ever released, in my opinion, and if you don't buy it, then you're one hell of a mug.