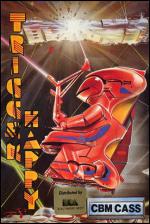 Having saved the good ship Thundercross from a vast, intergalactic Hoover, Flight Commander McCoy faces a sterner mission: Space Control 25 reports than an alien force is causing havoc in the outer reaches of the stratosphere.

Taking control of an AFC (Advanced Flight Capsule), the Commander faces a fleet of 32 right-to-left horizontally scrolling alien spacecraft, comprising mazes of ground installations defended by gun turrets, traps, shield repairers and destroyers. Contact with any of these or their frequently launched projectiles results in depletion of a shield, total loss of which is fatal.

The AFC is armed with three multi-directionally firing rocket launchers, capable of destroying all enemy obstacles. Unfortunately, a major design fault resulted in the capsule being unable to move whilst its weapons were blasting aliens into gobbets of slime.

The full screen playing area is supported by an information strip which details the score (increased for destroying ground targets), the current level and shield remaining. Completion of a level rewards the player with a password allowing direct access to the next level from the title screen: completing the game reveals a special screen allowing the player to become involved in future releases from the Zen room!

Just when the rancide Thundercross (16%, Issue 35) is fading from memory, CRL release a sequel which looks identical and plays even worse.

Personally I don't think Trigger Happy should have ever gone further than the design stages. The concept is pathetic - guide your ship over a shuddering horizontally scrolling landscape, avoiding or shooting obstacles.

Yes, that's all there is to it - blast 'n dodge 'n fall asleep. This complete lack of depth is further compounded by the inept game design: the ship is often put into a situation where if it choose a wrong route it gets destroyed - so it's luck and not skill that often gets you through a screen.

On the positive side Trigger Happy sports a good title tune, but really it's worth nothing when the gameplay as appealing as eating green rotting tripe.

I must admit that my belief in reincarnation was flagging but Trigger Happy has changed all that. The soul of Thundercross hasn't returned to Earth in the form of a cute little rabbit or a wriggly earthworm, but as its own twin brother.

Gameplay *has* changed, but only slightly, with the addition of a strange shield replenishment system, and the fact that hours of practice to get to a new level could be wasted if you steer your capsule down one of the many dead ends.

The difference between levels, though, is minimal and there is no compulsion to play more than a couple of games I'd be quite "happy" to pull the "trigger" on this one.

Hmmm... First impressions may make you think that this is the notorious Thundercross disgused as exactly the same kind of slow, jerky, horizontal scroller. However, after considerable playtesting, observing the awkward eight-way control method, the blocky, blandly coloured graphics and feeble sound effects, there is a slight difference: the title music is marginally better!

There are two major things wrong with this game: there are no airborne aliens to break up the monotony of avoiding ground defences, and you can't move when you fire - this latter aspect is particularly galling in tight spots since there's nothing you can do but lose energy!

These aren't the only poor aspects - name a category and see how long a Uridium variant can stoop - but they help to make this my turkey of the month.

Graphics 26%
Jerkily scrolling backdrops, coupled with indistinct and blocky sprites to create an effect of confusion and annoyance.

Sound 49%
A decent title track is marred by limited and bland sound effects.

Hookability 12%
In the confusion of graphics and control method, the first game is short. The gameplay makes subsequent games even shorter.

Overall 9%
If you had the misfortune to buy Thundercross, don't make the same mistake twice.

A pathetic game concept. Guide your ship over a shuddering horizontally scrolling landscape, avoiding or shooting obstacles. That's all there is to it - blast 'n dodge 'n fall asleep.