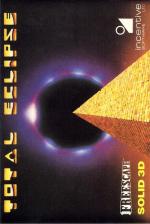 Incentive are still moving forward as far as 3D games are concerned. They got all the shape generating maths correct first time round with Driller, but the main problem was that they were slower than they should have been. Dark Side was a little better as far as speed was concerned, but it was still a little bland. Total Eclipse is a step forward in the right direction.

It features quite fast gameplay, a lot of intricate puzzles and some complex room designs. For exmaple, in one room there's a staircase, a symbol on the wall, a pedestal with a chair on it and a few blocks scattered about. All this takes up quite a bit of RAM, but the programmer has managed to put a lot of code in a little space. The miracle of compaction.

You start standing next to a bi-plane near a large pyramid, somewhere in Egypt. If you take a look into the sky, you see most of the sun. The reason you don't see all of it is because there's an eclipse about to take place. In two hours' time, in fact. The reason you are there is because some cleverdick cast a curse on the pyramid. The curse is "If anything should block the sun and stop the light reaching the top of the pyramid, the blockage will be destroyed." Should the moon expplode, then of course it takes the Earth with it. You have to get to the top of the pyramid and destroy the curse before it's too late.

Before you can start your quest, there are a few things you should take not of. Firstly, you must always watch the time. A wristwatch in the corner counts away the seconds, and you're going to need every one. Secondly is your heart-rate. Take too much damage and it speeds up dramatically. Take a rest before going any further. The final thing to take note of is your water level. In the hot climate, you have to keep a constant supply of liquid passing through your body or you dry up. There is water hidden around the pyramid, but there's only a finite supply, so you can't keep going back to the same old tried and tested water trough.

Mummies take the place of the laser guns in the two previous games, springing up from the floor when you step on a pressure pad or jumping out of coffins, as mummies tend to do. Waht you do with them is up to you to work out.

The Amstrad version is quite fast and smooth, and colour is used to good effect. One clue to getting anywhere on the game is that opposite walls are always the same colour. If they're not, maybe there's something you're missing out on...?

The Amstrad version is quite fast and smooth, and colour is used to good effect.