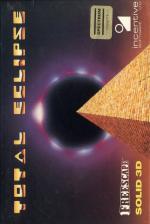 In the beginning, there was Driller. Then, a bit later, there was Dark Side. Now, even later than that, there's Total Eclipse. What do they all have in common? Freescape, Incentive's revolutionary 3-D display system which lets you explore every aspect of the gameplay area from every angle, that's what.

The plot of Total Eclipse is a bit more down to-earth than the science fictiony Dark Side and Driller. This one's set in the 1930's, and your task is to explore an Egyptian pyramid and destroy the shrine of the sun-god Re. Oh, did I mention, the world is going to be destroyed by lunar meteorites if you don't manage it in two hours? Well, it is.

The Freescape backgrounds are, as usual, excellent; each separate chamber is shown in a single colour, with rampways, stairs, treasures, mysterious objects and doorways liberally scattered throughout. To move through locked doors you need to collect Ankh symbols; to please your bank manager, pick up treasure; to keep yourself in good health, find water troughs and keep an eye on your heart rate.

It's important to explore every inch of the chambers, the perspective view shifting as you move around. You can also shift your viewpoint up or down, crouch or stand, and choose your speed of walking. Watch out for unexpected falls: too many jumps off stairways, and crying for mummy won't do you any good.

Interaction with objects consists mainly of shooting them; activate your sights with the space bar and you can aim at and shoot any object. Try shooting the eye on the wall for a useful clue, or the casket for a helpful object.

While the pretty glyphs on either side of the main display serve no function at all, the gubbins at the bottom of the screen is invaluable. The wristwatch shows you the remaining time until the eclipse, and zooms forward if you hold down key R to rest. The water bottle shows your remaining supply, while the heart beats in time with your pulse. If it starts palpitating violently, it's time to take a rest, or you may die of a heart attack. The continuous sound effect of the heart beating is the only annoying aspect of the otherwise satisfactory sound effects.

So far, there's little chance of me winning; usually, I run out of water, at which point you die and get treated to the sight of the moon exploding.

Total Eclipse is a fabulous game playing experience, but it must be said that if you have already played Driller and/or Dark Side you may find it a bit samey. Like the Ultimate Filmation games, which started off as astonishing and ended up as dead boring without actually decreasing in quality, Freescape games might have a fairly short life span. So get 'em while they're hot.

A fabulous game-playing experience, but it must be said that if you have already played Driller and/or Dark Side, you may find it a bit samey.