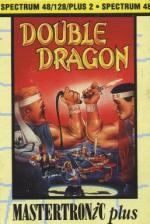 If I remember correctly, when I reviewed this as a full-price game, screams of outrage greeted my less than enthusiastic review. I don't regret a lot of what I said then, 'cos as far as I can see practically every other beat-'em-up on the market is better than Double Dragon in one way or another.

The plot is pretty familiar: fearless ninja warrior fights his way through several horizontally-scrolling backgrounds, beating up all sorts of thugs. The gimmick in this version of the theme is that there's a simultaneous two-player option, which is a big help when you're being attacked from both sides and don't know which way to turn.

The big problem is that the graphics are less than mean; the backgrounds are fairly uninspired, but the characters look more like train-spotters on their day off than fearless hard-nuts. To make it worse, the animation is slow, and the actual fighting moves are so pansy as to defy belief - the vicious headbutt looks more like you're puckering up for a big snog, the flying kick looks more like something Rudolf Nureyev might do as a warm-up, and the brutal face-punch is more like a girlie hand-bag slap.

Though there are some consolations though, like the barrel-throwing giants and the whip-wielding naughty ladies, on the whole even the attractions of a budget price shouldn't tempt you to try Double Dragon if you have anything else in the same line - Renegade, Target Renegade, Dragon Ninja, practically anything.

Very poor Vic. Don't be tempted if you already have anything similar.

Very poor, Vic.Don't be tempted if you already have anything similar.