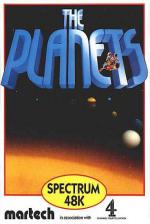 Ah, the sun drenched shores of Jupiter, the storm tossed majesty of Mars... the sheer boredom of a wet weekend on Pluto.

In The Planets - a package tour of several small games rolled into one - you're the lucky commander of a spaceship cruising the solar system in search of adventure.

Your mission to visit planets and hunt out mysterious deadly capsules, open them and put the clues together to save the world. This Cook's Tour calls for a variety of skills, and leads into the first game of the bunch, how to land successfully. The Explore icon leads to a Surface Lander option which calls up a map of the approaching planet, a glowing block indicating your target. Yep! This is like Lunar Lander!

The aim is to balance the rate of descent with fuel consumption. You have to hit the ground at less than 20 metres per second so you counteract gravity with thrust. That's fine but if you use too much Esso you'll never get back up to 10 kilometres and the waiting Tractor Beam.

Out in space you're likely to encounter the odd shower, but don't bother with your umbrella because it's meteors. In fact it's an Asteroids shower as that age-old arcade classic makes a welcome reappearance, endangering extra-terrestrial travel. Suffer enough damage and the only place you'll get repairs is Earth.

When you're safely on the surface you'll want the other Explore icon, which chooses your Robot. Unluckily its graphic capabilities aren't as sophisticated as the travel brochure picture of the planet that first greets you. All you get is a colour-coded pattern of squares to indicate the type of terrain.

Your three robots are controlled rather like Logo turtles, with forward and turn commands, rather clumsily effected from the ubiquitous icons. Keep track of your movements or you could get stranded on Saturn which would be a real pain.

You get three surface scout robots but only one lander so be careful or you will experience that terrible 'The Earth is doomed... message with its unspoken conclusion '...and it's all your fault'.

You may wonder how you're ever going to find a way into the other capsules. That uncanny good luck seems to have deserted you (ie the instructions don't give you any more hints!).

Time to power up your on board Spectrum and play Weird. Never has a game been more accurately named. Weird looks like Jeff Minter at his most manic. It's a sort of psychedelic Grid Runner game with lots of coloured blocks. I've got as far as the fourth screen, but don't ask me how or why.

The Planets is a novel combination of older elements (Lunar Lander. Asteroids, Moonbuggy) making up a unique whole. It's not the most action packed game, though concentrating more on scientific credibility and simple simulations of the strategy of controlling a space craft.

Combines a few old ideas with some nice graphics. For thinkers rather than trigger happy universe savers.