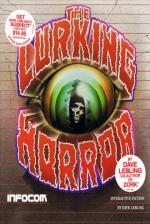 On a cold winter's night, with a blizzard raging outside, you find yourself trapped in the computer building of the George Underwood Edwards Institute of Technology. Never mind, you have an assignment to get finished by tomorrow, there is only one other student using the computer terminals, so now is the time to get on with it.

You log into the system, edit the paper on which you are working, but instead, some very strange text fills the screen. Mesmerised by its nightmarish quality, you faint. When you come round, you find yourself clutching a cool, smooth stone with some weird markings on it.

Your colleague, a hacker if ever there was one, comes over to see if you are all right. He diagnoses that your life server has been corrupted and somehow entangled with that of the Alchemy department.

So you head for Alchemy but, with most of the college buildings locked up for the night, your route takes you down into basements and tunnels that link thev arious buildings of the campus. Students have been warned not to venture into these parts, for they are old and decrepit, being part of the original buildings that once stood on the site, and held to be dangerous. It soon becomes apparent that something very nasty is going on down there...

The first hint anything is amiss comes when you reach the Aero building, and start to traverse the so-called 'infinite corridor' to Alchemy. A maintenance man is riding a floor waxer, and is determined not to let you pass. But is he really a maintenance man? Come to that, is he really a man? A cold shiver runs down your spine as he disintegrates, and turns into dozens of squealing little creatures who disappear at great speed down the corridor.

Before long, you have forgotten about your assignment, and become hellbent on putting a stop to what seems to be a takeover of the college by an evil life-force.

Very much in the style of a modern horror movie, this is an Infocom shocker from Dave Lebling, whose graphic text makes graphics redundant. It will leave you, more than once, feeling slightly queasy and decidedly uneasy.

I put The Lurking Horror on the same level as Stationfall, although, preferring science-fiction to horror, purely as a matter of personal taste, I found this slightly less enthralling. If you are into horror, and into adventures, get into The Lurking Horror!

I put The Lurking Horror on the same level as Infocom's earlier Stationfall, although, preferring science-fiction to horror, purely as a matter of personal taste, I found this slightly less enthralling.