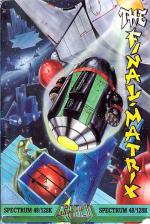 Latest out of Gremlin's goodie-bag is The Final Matrix.

After Thing Bounces Back, which was fast, furious and complex. Matrix is more trundle-ly (huge sighs of relief all round) but damn near impossible.

Why, you may be asking? Well, here's the basics first. The Bioptons are small, cute and metallic. Returning from a space outing, several Biopton's found themselves hi-jacked by the mean old Cratons, and carted off to the sinister prison complex, the Matrices. Rubbing their hands with glee (or whatever the Cratons have that pass for hands) the Cratons informed the Bioptons that there was no hope, that the hostages would be assassinated in 99 aeons (approximately 99 earth minutes) and there was nothing they could do about it.

Wrong. Enter Nimrod, the bravest Biopton of them all, who volunteered to beam down on to each of the Matrices in turn and rescue the good guys whilst wasting the bad guys.

So there you have it. A 3D prison-complex-room-game, seek and find, kill the bad guys, collect the hostages, get the hell out of there. No sweat. But there is. Because this game is weird!

Probably the most weird thing about Matrix is what should be the most simple thing, controlling the character of Nimrod. The sensation that you get is rather as if Nimrod is on ice - he carries on moving after you've let go of the joystick. Which makes life terribly tricky when he's balanced precariously on the top of a wall, with a whole heap of nasties underneath, just waiting for him to fall. A lot of lives get wasted just getting yourself familiarised with the controls.

Visually, The Final Matrix is pretty nice. The sprites are large and clear, and Nimrod's antennae jiggle about very fetchingly as he trundles along. The three-dimensional aspect of the game is beautifully drawn. As well as moving up and down and side to side, Nimrod can climb walls.

And are there lots of Cratons! They're just so mean you wonder if they had an unhappy childhood or something. They follow Nimrod about, shooting deadly laserbolts at him, and aren't very good at dying. And the danger doesn't stop there. As well as the guards, there are wire-frame beasties which mirror Nimrod's every move, pushing him into corners. There are disruptors which shoot across the screen and knock everyone off course. There are mines, which result in immediate and severely debilitating death. And there are squares which sap energy, squares which catapault you back in the direction you came from... etc etc...

To help Nimrod (you mean he gets help?) there are blocks to push about and hem the Cratons in, energy replenishing squares, ammunition- replenishing squares and armouries where he can change his weapons. There's also a TV monitor which allows him to scan the area and see how many guards and traps there are around the place.

You have only a limited supply of ammunition and energy, and there's no indication as to where the replenishing squares are.

You use up a fair bit of ammunition killing just one Craton, and on even the simplest Matrix there are at least four guards. Strategy is all important, but it's terribly hard to formulate a good one when you can't see where you're going because the screen's so small (and that's a major flaw) and even if you could, you have* no idea where the people that you're looking for are.

The only hint I can think of are to start on Pludos, which seems to be the easiest Matrix, and to keep at it.

The Final Matrix is obviously an impressive game, both visually and conceptually. But the gameplay is hard to cope with at first, and if you're someone lacking a lot of patience, then you might find that you get fed up with being dematerialised within twenty-five seconds.

Oh, and watch out for the black ice.

Visually stunning effort from Gremlin, but the gameplay is perhaps too complex to prove addictive.

Visually stunning effort from Gremlin, but the gameplay is perhaps too complex to prove addictive.