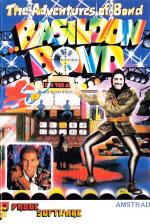 Basildon Bond is the creation of comedian Russ Abbott and, along with some other of Russ's characters, he is the star of this exploration and "joke-solving" game. The aim is to rescue Russ from a rival comedy act by putting together some of the oldest jokes known to man.

The action takes place in the TV studios, where jokes and answers are to be found by searching the various bits of equipment and furniture. You control Bond as he runs around the 2D rooms that make up the studios, and although the character is rather chunky, he is animated quite nicely. The rooms are colourful, but again tend to be on the blocky side.

There are many objects to be found lying around the studios such as video tapes, TV remote controls, earphones and electric kettles, most of which are used for searching furniture. To search a piece of furniture, Bond needs a specific object. Which particular object searches which bit of furniture has to be discovered by trial and error. The combination stays the same throughout a game but changes for each new game.

To get between rooms Bond merely has to run into a door which will creak open and take him to the next room. Some rooms have different levels of platforms to explore and these are connected either by stairways or boom cameras that can be moved up and down like lifts. The playing area is quite large and a fair bit of exploration and mapping is required.

Many rooms have killer cameras that patrol up and down the floor and platforms, and these are Bond's main dangers. If he runs into them he's sent back to the start room and loses ten minutes off the five hour time limit. They can be stopped in two ways: either by having a magnet in the same room which freezes them, or by using a Cooperblaster.

Cooperblasters are limited in supply but cause either Cooperman or Blunderwoman to appear on screen. One of them bounces diagonally around the screen, killing any cameras it comes into contact with, and the other moves straight across the screen while you move it up or down, trying to hit a camera.

Once you find part of a joke, it has to be taken back to the start room and logged into a computer before 'the face' appears and gets you, removing the joke back to its starting position. Once logged, the jokes and answers have to be matched up to provide the jokes in all their ageing glory, and believe me they are older than Max Bygrave's.

The graphics are distinctive and colourful, but chunky so that the rooms often have a garish look to them. The gameplay isn't particularly addictive but does present a tough challenge as you try to link up objects and furniture. At first it seems very unimpressive but the tactics of exploring, avoiding cameras and finding jokes grow on you to make a reasonably enjoyable game.

Plenty of rooms to explore, and they're all as ugly as anything. If you can put up with all that horrible chunkiness though, you have a large and difficult game. The gameplay's a bit repetitive and the jokes are ancient, but it is the only game around that features Blunderwoman and that's got to be worth something.

Those awful graphics are even worse in mono, but you can still see everything.

P. Large playing area to explore.
P. Many objects and pieces of furniture to find and search.
P. A tough game task with plenty to overcome.

N. Graphics are chunky and garish.
N. Little depth to the gameplay; it's just running around swapping objects and searching.

At first it seems very unimpressive but the tactics of exploring, avoiding cameras and finding jokes grow on you to make a reasonably enjoyable game.