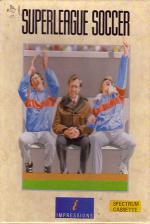 'Wicked', 'Brill' and 'Hurrah' are just a few of the words which didn't spring to mind when I was 'invited' to write this review. Nope. 'Why me' seemed slightly more appropriate because, as you people can probably imagine, I wasn't exactly thrilled to bits at the thought of having to plough my way through yet another footie game. Then again, I suppose someone had to do it - it's just unfortunate that it had to be me.

Ho hum. You know the story. Pick a team (to manage of course). Chose your players. Play a game or two. Snore. And yes, readers, it's all as boring as ever, although apparently this ones 'revolutionary'. Blimey! I cant help thinking that perhaps they confused the word 'revolutionary' with 'crap' because, as I feared, it really is a load of old tosh. The only revolutionary thing about it is the strange control system it's lumbered with (we really are talking Weird City and a half here).

Let me explain. Rather than sort of wibbling the joystick to control each player individually, as in Matchday or Italy 1990, you chose which player you want to move, move this little cursor to where you want him to go, press 'fire' and off he trundles. Exciting, eh? You can (of course) set it so that he kicks the ball, or dribbles with it or whatever. It sounds a bit useless and it is a bit useless - by the time I've worked out what's going on the opposing side have scored around ten goals. Ahem.

Righty ho. I hope you've understood what I've been on about so far (unlikely), but even if you didn't it doesn't matter too much - all you really need to know is that this game seems to have had more than its fair quota of beef (i.e. it's a bit mad).

And it's a bit nob. Everything is so small that you cant really see what's going on (so the ball gets lost far too much) and the management side of things (which could potentially save it) seems pretty ropey as well. You can skip the manager bit if you want and just get a result of the match but this isn't really advisable because you always seem to lose. (Of course, since I always lose anyway, this could be a blessing in disguise because it saves all that hassle with fiddling around with players and things).

And there you go really. Hours of fun (I don't think).

A different type of footie game, but unfortunately it's crap.

A different type of footie game, but unfortunately it's crap.