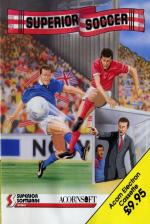 With the football season now in full swing it is no surprise to see another football game released for the BBC, Master and Electron. This is a full feature management simulation and arcade soccer game rolled into one. The two elements can be played separately or together. This should widen the appeal of the game to a larger audience.

Programmed by Peter Scott in his own unique style there are lots of options to choose from. You can have one or two players with definable keys. The options are selected via an easy to use menu. You can select whether to play the arcade game only or management only or both together.

The part which appeals to me most most is the arcade game. You can select what colours to play in and how long each game should last. When you are ready, select play and you're off! The screen shows a small view of the pitch which scrolls to keep the ball centered. The scrolling is fast and reasonably smooth. At the top left there is a map of the pitch which shows player positions. This is used to locate nearby team mates or opponents. You gets a birdseye view of the action with graphics which are well animated. Sound is used to good effect and the game is fast paced and exciting.

The current player being controlled is indicated by flashing arrows. The control method is complex as there are several key press combinations required to dribble, pass, tackle and shoot. This complexity spoilt what could have been an excellent game. In other games of this type when you gain possession of the ball it sticks with you until you are tackled. In Superior Soccer if you try to run with the ball and turn round to go in the opposite direction the ball is left behind. This means you are forever losing control of the ball. It is then a matter of tackling the opposition to get it back. To overcome this fault you need to practise for ages. The trick is to sort of push the ball in a direction without turning sharply. This is almost impossible when you are in the midst of three opponents. This aside the game is playable and with practice you can get quite skilled at ball control.

Management simulations are for the thinkers among us and are fun to play in themselves. There are options to select a team and players. You can buy and sell players. You start in the third division and have to play matches to work your way to the top. After each game you earn money and, if you win, gain points in the league table. I found what may be a bug when I played as Liverpool until I reached the top of division three. The game crashed after it reported that I had reached the top. I hope this problem has been sorted out.

In conclusion I found the game to be playable but too difficult in the arcade section. I would recommend you try before you buy.

After a long wait for this game to be released I was pleased to see it arrive on my doorstep. On loading you find yourself confronted by a Choices Screen offering you the chance to play the Soccer game on its own, the management game or a combination of both - this being the outstanding feature in this release! I decided that my best course of action, would be to have a look at the combination game. First you have to decide which group, out of four, that you wish to play in, and which team. This team is then placed bottom of the league in order for you to work your way up. All of the options are chosen by means of an arrow which is directed by the cursor keys. At times this was rather annoying as it was hard to get onto the option that you required. After this you are shown a table of fixtures and you go on by moving your arrow to the "GO ON" choice. You now choose at least one player to be dropped from the game which is about to be played. You are shown their names, skill level and strength and normally drop the one with the least skill or strength. Now comes the exciting part; you are ready to participate in a game of football. The screen before the start of the match offers you the choice to change the time, played each way, and the colours (which is not really necessary). The game begins with kick off from the centre point. As you are playing the computer determines the difficulty of the match. This depends on your decisions earlier on about who to axe from this fixture.

Your view of your red player and the rest of the pitch is an overhead one. He has four small corner marks around him in order for the user to see where he is when playing. On the top left hand side of the screen is a small scanner showing the position of all the players but this is more of a novelty than a necessity.

The ball is bigger than the player, and makes play a lot easier than earlier simulations such as Goal for instance.

As you attempt to move towards the opponent's goal, your other players often get in the way, but it is possible to pass to them and make the game a bit more than a one-man show. When the opponents actually get the ball, a sliding tackle usually helps to retrieve the ball, but if misjudged then your little man looks like he is ice-skating across the field. All of the usual up, down, left, right and kick keys are included and, by using a combination of them, other effects such as kicking the ball in the air, dribbling, heading, etc can be achieved.

Corners, goal kicks and throw-ins are all included and are utilised by a power bar shown at the side of the screen varying the amount of power behind the ball. With Goal Kicks and Throw In's the man moves in different directions and you can launch the ball almost anywhere on the field.

Whilst the match is in progress, in the bottom left hand corner is a David Coleman/Jimmy Greaves type announcer, sporting a pair of headphones and a microphone constantly giving remarks on the game. This I liked, because his mouth and eyebrows move whilst he garbles away.

At first the opponents usually score, but with a fair bit of practice you soon get the hang of it. After the game has been played, you move on to further management material, where you can buy or sell players, preview the league table, etc.

If you decide not to play the mixture of both, the Arcade Soccer on its own provides a One/Two Player option, and also skill level choice as well as the options previously mentioned, and on the Management only, the computer decides the outcome of the match without the aid of a visible pitch or game.

I found that there were a few points that perhaps could have been improved in this game, including making your player stand out more as quite often when your opponent had the ball, my player was nowhere to be seen as I had accidentally guided him off the screen! Also kicking the ball long distances only seems to work occasionally and I would have found even more pleasure in playing the game if I had control over the goal-keeper (the computer operates him).

Putting the minor points aside, what with the option to change keys for both players, this football game is probably the best mixture and the only mixture of arcade and managerial software around.

This football game is probably the best mixture and the only mixture of arcade and managerial software around.