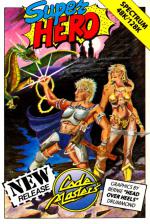 After a seemingly endless list of simulator games, Code Masters now bring you the story of how the immortal gods spend a wet Sunday afternoon. Providing the actual programming are Bernie ' Head Over Heels' Drummond, Paul Machacek and Guy Stevens.

It can't be easy being a god, lording it over the mortals, sending the odd earthquake, tidal wave or Nick Roberts' Debbie Gibson record to keep them in their place. So to relax, the gods give each other complex puzzles to solve, and you have three guesses whose turn it is today (come off it, it was my turn last week). You take the part of an immortal superhero who is playing for the ultimate stakes, lose and you will be stripped of all your status, as well as your immortality.

But at least someone is on your side, Venus (we're only good friends, honest) has kindly hidden four items to aid you in your quest. Power boots enable you to jump obstacles, a warhammer arms you against the games less friendly inhabitants, a trans-dimensional bag enables you to carry any object, whatever its size, and a mystical helmet entitles you to be showered with gifts from your fellow immortals.

Once these items are found it's on with the show. You must find and defeat the five Guardians who wander the corridors of the complex. To do this you have to destroy their spirits, which are trapped in certain rooms. Once one is killed you enter the DeadZone and if the DeadZone is successfully navigated a bonus life is awarded (but I thought you were immortal? - Ed) (don't ask me why? that's just how it goes, I'm afraid - Mark). But life is not that easy, as many puzzles, pitfalls and nasty creatures stand in your way as you wander through the rooms and corridors.

Although the main character is unique, many of the puzzles and traps look as if they have been lifted straight from Mr Drummond's graphics for the CRASH Smashes Head Over Heels and Batman. The nicely detailed backdrops, by contrast, remind me vaguely of the Ultimate games Knight Lore and Gunfright. As in most cases the walls of the various rooms are not visible until you enter them, as well any nasty surprises lurking there.

To obtain surprise gifts from other gods - such as winged shoes, teleport keys and ESP activators - is essential. Gold is especially useful as you can buy the aforementioned goods from traders if the gods feel a bit stingy.

Super Hero, despite graphically resembling almost every other arcade strategy game in existence, is certainly playable. If you're not as tired of the genre as me, give it a try.

THE ESSENTIALS Joysticks: Cursor, Kempston, Sinclair. Sound: ear-wrenching at times. Options: thankfully it can be switched off

'Although the graphics do rather resemble the Head Over Heels style, that doesn't make them any less cute. I particularly like how the chubby super hero's hair is blown upwards as he jumps through the air. Sound is disappointing though, its only good point being that it can at least be turned off. Play some good heavy metal music in the background and you'll discover some fascinating, if unoriginal gameplay. As in most isometric arcade adventures, pushing blocks around the screen to access higher areas is the main constituent of play, but the addition of teleports and traders makes Super'

Although the graphics do rather resemble the Head Over Heels style, that doesn't make them any less cute.