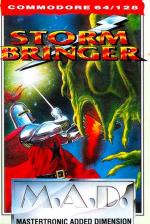 After his space escapades in Knight Tyme (a game never seen on the C64), Magic Knight has returned to his own time only to find that his time machine has split him into two knights, one good, the other evil. The 'Off White Knight' is also called "Stormbringer" because of his powerful pet thunder cloud with which he plans to destroy Magic Knight.

To rectify the situation by somehow merging with the Off White Knight. This he does making the most of what he can find about him, and interacting with seven other characters who are in the environs to aid or obstruct his progress. A cursor-driven list of options pertinent to Magic Knight's current circumstances is available via a system of windows and subwindows, allowing him to pick up, drop, give, take, wear and examine objects. Other special commands, say for casting spells, becomes available as certain objects are collected.

Arcade adventures don't come much more adventurish than this, which may be just as well. The Windivision system, though comprehensive, is intrusive, and it's not unusual to have to go through three or four menus to perform the correct action.

I would have felt happier with a single key command selection - P for Pick Up, G for Give, and so on. I found the puzzles just as obscure as those in previous Magic Knight games, so I suppose Storm Bringer would be a worthy purchase if you enjoyed solving Spellbound and want more of the game.

Even if you're new to the series there's enough head-scratching for your three pounds.

This offers similar stuff to its predecessor Spellbound - a basic graphic style, some neat touches (try putting on the Walkman), and a cute main character - unfortunately, it's all too familiar. The Windimation system is (or at least was) innovative, but commands are sometimes clumsy, requiring three sub-menus to perform an action; when you're played the game for a while this gets tedious.

If you like your adventure and arcade action combined, this should appeal; if you have the original and weren't too keen, forget it.

Presentation 67%
The selection system, though comprehensive is very convoluted in practice.

Lastability 72%
Copious puzzles to solve if you can get along with the menu system.

Overall 70%
Not the most outstanding part of the Magic Knight saga, but should nonetheless appeal of fans of the series.

Not the most outstanding part of the Magic Knight saga, but should nonetheless appeal of fans of the series.