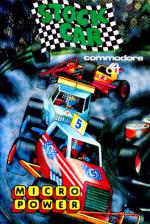 Commodore 64 games are generally renowned for their graphics, but this one is an exception; the main screen shows just a plain view of a brown racetrack against a green background, with four oddly shaped cars driving around it. This is followed by a screen showing an oddly shaped driver collecting a cup. The poor graphics don't affect the playability. It's a pity that it isn't more visually attractive.

It's a one or two player game. You can choose between different circuits, and select the number of laps, speed, and other factors. The cars are controlled by keyboard or joystick, and you can turn left or right, or shift up or down through the four gears. When playing with a joystick it's easy to change gear by accident while trying to change direction. The third and fourth cars in the race are controlled by the computer, and are there to obstruct you. The real race is against the clock rather than the other cars.

It's not realistic, and even with good graphics, I don't think I'd buy it.

Other Commodore 64 Game Reviews By M.N.

It's not realistic, and even if it had good graphics, I don't think I'd buy it.