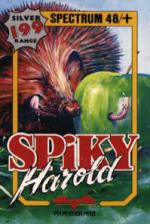 Who'd be a hedgehog? When you're not being squashed by speeding cars you're appearing in budget computer games!

Spiky Harold is subtitled, 'Goes Hibernating', which sounds about as exciting as watching paint dry.

It transpires that the game isn't so much about sleeping as preparing for that long winter lie-in. Harold has to gather a store of food in case he should feel peckish around mid-January. This can mean but one thing - it's a collecting game.

In its favour, Spiky Harold is well designed with nice big sprites, a colourful system of caves and one or two cleverly designed screens, such as the one where you'll slide straight back into the path of an on-coming nasty unless you leap forward again immediately on reaching the ledge. There are also some nice touches, such as the ferocious munch as Harold bites into a tasty morsel.

There's also a time limit. In 24 hours the first frost of winter will set in and you have to guide Harold back to base before the big freeze.

There are 57 objects in all to collect, including the coins which give extra lives and the wine glasses that make Harold drunk. Being in charge of an inebriated hedgehog is no joke and for a while you'll find he does exactly the opposite of what you command him to.

It's another timely release from Firebird - hibernating just as the summer is coming on. Remember, it was Firebird that launched The Comet Game after the comet had gone!

Spiky isn't brilliant, but it is cheap.

OK, so it isn't earth- shatteringly original. But there are worse programs at the price.

Being in charge of an inebriated hedgehog is no joke and for a while you'll find he does exactly the opposite of what you command him to. I guess there are worse games.