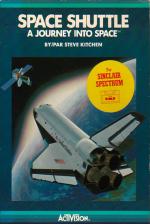 A simulation game based on the American space shuttle which takes you from launch site to outer space and back. The objective is to retrieve satellites which have become unstable and return them to Earth, making as many flights as possible on a set amount of fuel.

The tape comes with a very comprehensive instruction manual which looks as if it's come directly from NASA. I locked myself in the loo and studied it for an hour or two (the book of course, not the loo).

"Wow," I thought to myself. "This really looks exciting, just about everything has gone into this game...!" I rushed to the computer, loaded the tape and ran the demo.

Well, I have to admit (in disagreement with the Ed) that I found the graphics rather boring. It's not that they are badly drawn, but the instrument panel is rather sparse and visually there is not a lot to see.

The top half of the screen is taken up with the window of the shuttle and the lower half is the instrument panel. This consists of two sliding scales, one with a thrust indicator on it which shoots up and down, and another which you control. The idea is to match your indicator with the thrust one in order to achieve maximum fuel economy. Below that is a small screen which gives you data reports such as altitude, countdown time, fuel, position and docking. Another small screen shows your trajectory path for take-off and docking.

At the bottom left and right is a front view of the shuttle which graphically shows you when your wheels are down and if the cargo doors are open or shut.

After you have checked through the controls, you are ready for launch and at T minus 15 seconds you activate the main engines. At -004 you ignite the engine and wait till the hold-down bolts release and you blast into space.

One of the effects I did like was the vibration of the screen at lift off and the way the clouds seen through the window suddenly disappear. As the shuttle takes off, you have to steer it via the joystick on its trajectory path. When at 210 miles you have to shut off the engines and open the cargo doors to dissipate heat. Through the window you see the earth below, which is a series of lines constantly moving to give a global effect. Using the tracking screen you have to find the satellite and dock with it.

At this point I was hoping to see the cargo bay and a controlled arm come out and retrieve the satellite, but not so. Once docked with it, it just seems to leap aboard. Now, you have to leave orbit and attempt re-entry. As you enter the Earths atmosphere you start to burn, and the effect in the window as the heat builds up is astounding (the instruments go haywire as there is build up of ions).

Once below the clouds, you see the landing strip and you need to go through the landing sequence to bring it down. You will find your fingers are constantly in use as you fire primary engines, keep the shuttle on course as it turns on three axes and go through each sequence with absolute precision.

To sum up, I thought the graphics were a bit of a let-down but a hard and accurate game it is to play. With some flight simulation games, after an hour of use yu really feel that you have flown a plane, but I didn't get the same feeling with this one. May I suggest that, if you are interested in this one, try and see the demo before you buy it, but, as I said, the Editor liked it.

With some flight simulation games, after an hour of use you really feel that you have flown a plane, but I didn't get the same feeling with this one.