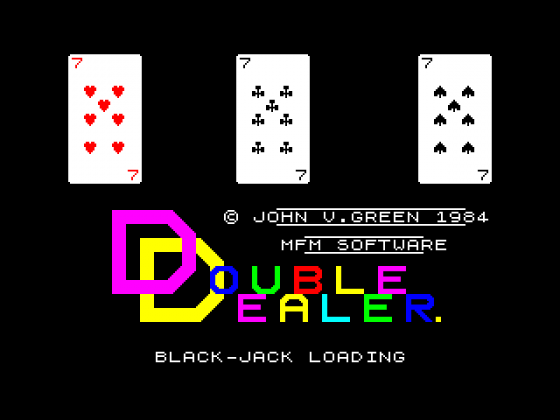 As you might guess from the title, it's a card game. There are two games, one on either side.

Game 1 is 'Black Jack' or for the less informed, 'Pontoon'. A fairly simple game where you are dealt two cards and, with the cards you have, or more if you require, hope they add up to 21. Go over 21 and you have 'bust' and lost. If your cards are less than 21 you have the option of either 'sticking' with what you have got, and hope the computer cannot beat you, or 'twisting' and have another card to try and reach 21.

On the other side, the game is a little more complex, but nothing as complicated as bridge. It's 'Stud Poker', one of the best gambling card games there is. I won't go into the rules now, but basically each player has a 'hand' which carries a value. You have to try and assess the value of your opponent's cards and, if you think your cards are worth more than his, then you bet money which he has to equal to stay in the game. If he has a low value he can 'fold' and drop out. However, he might have a low value and try to bluff you. The computer will play the most experienced player and has all the abilities of bluffing and clever betting.

A very good game and well written, but I thought the layout of the cards could have been better. For the 'Mavericks' amongst you it's played with a French deck with 2s as a wild option.

A very good game and well written, but I thought the layout of the cards could have been better. 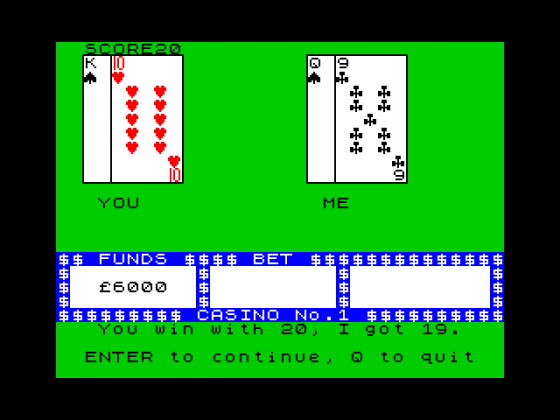