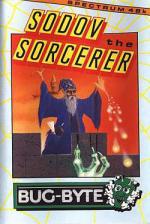 A few years ago this game arrived on the Commodore with the rather tame title of Gandalf. Bug Byte have taken it out of the cupboard, dusted it down, converted it for the Spectrum, up-dated the title and scenario a bit and released it as a budget game.

Sodov the wizard, in keeping with modem times, has abandoned the apprenticeship concept in favour of the Youth Opportunities Scheme. While he scampers around the battlements of his castle shouting magical spells which turn marauding green dragons into lumps of gold, Sodov's YOP stays in the castle courtyard stirring a cauldron.

The dragons, true to form, are fairly aggressive beasties. What they want is Sodov's YOP a tasty morsel in dragon terms. The dragons scamper around the field outside the castle, trying to avoid Sodov's magical wrath as they run towards the castle walls to beat on the portcullis.

Sodov casts his spells using a Mission Command style crosshair cursor to aim his magic. He can scamper left and right along the battlements and along the castle floor by holding fire down with the appropriate direction key, entering the towers at the left and right of the screen to change levels. Each time a spell is cast Sodov loses some energy from the counter on the status bar at the bottom of the screen. More magical power can be drawn from the magic star in the firmament if Sodov goes to the top of one of the towers providing the star's not covered by a cloud.

All is not in Sodov's favour, however. Every so often a mean red spider potters into the castle andscurries round. If it touches Sodov he loses magical energy, but he can take refuge from the red meanie by hiding in one of the towers until it goes away. The little cloud which scuds across the sky is more than a nuisance covering up the power star from time to time. It occasionally shoots a power-sapping bolt of lightning at Sodov, knocking off some of his energy points. And to add financial insult to magic injury, an ostrich turns up now and again in the field and pinches some dragon gold!

When a certain number of dragons have made it to the walls, they manage to get the gate open and one of their number enters the castle and drags the YOP outside. While YOPS are fairly expendable the wizard has three available Sodov can choose to nip outside and mount a rescue attempt. Temptation lies in Sodov's path, however. Lumps of gold are to be found on the ground outside the castle Condensed Dragon, produced the wizard's defensive magic. Should he collect the loot or save the YOP? Decisions, decisions...

Out in the field, the wizard is vulnerable to dragon attack they have particularly bad halitosis it seems, and a couple of puffs of Dragon Breath from close up kills the wizard, who explodes into the word 'DOOMED'. On the field screen, the wizard can lay mines in the path of the dragon that's got his YOP and is legging it towards the left of the screen. Sodov can only lay one mine at a time, and if he gets it in the wrong place it's a matter of waiting until a wandering dragon stumps over the mine before another one can be laid in the path of the abductor.

While waiting for a laid mine to explode, Sodov can scamper around gathering up the gold nuggets by walking over them. If the dragon dragging the YOP hits a mine, Sodov has a few moments to rush over to his little worker and lead him to safety before another dragon, seeing that lunch is about to escape, carries on the shopping and seizes the lad.

Should Sodov fail to rescue, his YOP he gets to keep the gold anyway, and it's back to the castle and on with the game, one YOP down and plenty more where that one came from.

'Apart from the obvious problem with the title, Sodov is an enjoyable game. Bearing in mind the price, it represents good value for money, and the graphics are quite neat. As to its lasting appeal, well, it depends on how much you like the game: you'll either hate it or love it. I fall into the latter category, I think. The sound isn't up to much, but the game doesn't need it. I can't see the sales for this running into the hundreds of thousands, but it may appeal to you - it appeals to me!'

'I am well impressed with Bug Byte's latest release: it's very playable and quite compelling. 1 first saw this one ages ago on the C64 - then it was very good for its time and now it is just as good on the Spectrum, and also very cheap. Graphically this game is not brilliant but the characters are fairly well done and the 3D works well on the 3D screen. Sound is limited to a few burps and squawks here and there - a tune or two would have been appreciated. After a bit of practice I'd got quite good at this one, and I can't see myself getting bored for a couple of hours at least.'

'I loved Sodov. It's a very simple, two screen game but it's a lot of fun to play, and makes a pleasant change from a diet of arcade adventures. The graphics are not stunningly detailed, but perfectly adequate nevertheless. I like the way the dragons blow up into little mushroom clouds when your spell zaps them. No music, a minimal scenario and only two screens to the game means it's not a super dooper hit. Plenty going on all the time you play, a neat challenge, humour, and the price all add up to a good deal. Get it.'

No music, a minimal scenario and only two screens to the game means it's not a super dooper hit.