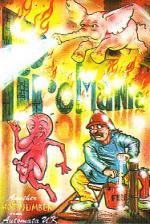 Automata Towers, that well known TV series, is on fire, and all the residents are threatened with flame out, a sizzling end to another fine day in tower-block suburbia. It's all the fault of that little cult, the Piman, whose soaring star has fueled the flames. Your task is to help Walter Hose put out the flames and save the inhabitants from becoming barbecued spare ribs. Despite his name, Walter has only a fire bucket and taps to help, unless he can get to the fire extinguisher. The method is to grab the bucket and run to the nearest tap, fill the bucket and then douse the flames which are breaking out all over the place. A bucket full will do the trick for a few fires, but it needs to be replenished frequently. Care must be taken to ensure a needy tap isn't isolated by burned out staircases.

Being a gentle bunch, some residents actually keep dynamite, and this should be removed to safety as quickly as possible!

There are also fire extinguishers to use, a pink elephant which dances beautifully, and doors which may be used to avoid the worst of bums. Points are scored for inhabitants and valuables saved.

'Piromania will obviously not be an epic, but it is quite a good idea and is very playable. It gets infuriating, especially when the piromaniac comes along and starts the fires again. If you leave a fire burning it will spread around all the building and eventually bum through the floors. I haven't found any dynamite, which is a surprise, as I got quite far with the game. I quite enjoyed it, and it will probably have lasting interest for me.'

'I don't think I've ever seen a game quite like this - it's certainly different. The idea is so simple even a moron could play this game, just get your bucket, fill it with water and put the fire out Saying this, the game does have a little more content than just putting a fire out I must say, it gets ever so frantic and panicky on the higher levels - and whatever is a pink elephant doing in a house?! One niggle about the game is that Walter is a bit over-responsive, or perhaps it's him just making a frantic dash to put the fire out, and he slides as he comes to a stop. Nevertheless, I found this game very playable and very enjoyable, but I don't know whether to recommend it, except for its sheer simplicity of play. A good family game. '

'Piromania is a fairly original platform game. The graphics are not very large, but they work well. The game has that quality that tends to make it addictive. Quite a few control keys are required, even with a joystick. Overall, I would say this 'hot' number is quite hottish.

The graphics are not very large, but they work well. The game has that quality that tends to make it addictive.