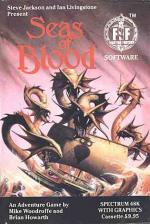 Everyone who enjoys Steve Jackson's and Ian Livingstone's fighting fantasy adventure books will be glad to see Seas of Blood from Adventure International. The game, in Adventure International's regular style, is based on one of the duo's plots and casts you as a pirate captain. With your villainous crew and trusty ship Banshee you set sail from Tak, den of cut-throats and thieves, to plunder the inland Sea.

You can pilot your ship around those landlocked waters and attack the trading vessels that ply between ports like Assur, Lagash and Calah. When you reach a port you can go ashore and explore the mysterious lands outside the towns. There you'll find ancient dead cities, tombs and catacombs, oases and hapless caravans loaded with plunder and provisions all for the taking. Your final aim is to collect 20 treasures and take them to the top of the great mountain in Nippur at the southern end of the inland Sea.

The Jackson-Livingstone format is well implemented by the use of text, graphics and combat routines which allow you to fight both ships and the men and monsters you will encounter on the land. The movement and messages are handled as in a normal text adventure with different instructions for land or sea journeys. When aboard you must always use 'Sail' followed by the direction - written in full. When ashore you can use the normal N,S,E,W abbreviations.

As in the books, combat is decided by simulated dice throws added to your stamina figure - which may well decrease if you are repeatedly wounded or hit. Your crew must be kept provisioned if they are not to mutiny so you have the added task of searching out victuals to keep them sweet. All that gives a variety of game tasks which help to keep the pace up. You cannot afford to be complacent or idle if you want to survive this violent world.

The graphics are well up to the company's usual standard, being fast and colourful. The interpreter is friendly and informative though the descriptions are not big - with detailed graphics for almost every location that doesn't seem to be a problem.

Remember that you can board some of the vessels you attack - the stately Barge is quite important from that point of view - and generally you can only go ashore at ports. It is wise too to keep a weather eye on your status screen to check out your provisions and crew strength. You may have to hire crew when too many have been killed, though I never got that far.

The variables make for an action- packed adventure which keeps you on your toes and the programming quality is just as good as the company's other games. Recommended for swashbucklers and armchair Long John Silvers.

The variables make for an action- packed adventure which keeps you on your toes and the programming quality is just as good as the company's other games.