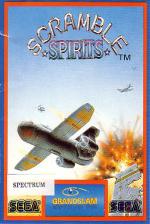 Imagine you're piloting a World War II aeroplane, you're flying along happy as can be, when all of a sudden there's a giant spirally hazy shape in front of you. "What on earth can that be?" you cry, wrenching the joystick to the left in an attempt to avoid it. "Surely it can't be..." And then you hit it.

Yes, as you regain consiousness, you realise that your earlier fears have been confirmed. The giant spirally hazy thing was in fact a Time Warip (straight out of The Twilight Zone), you've jumped forward a century or two and you're now flying at angels two zero above a rather futuristic-looking landscape. There are turrets that fire deadly beams of light at your plane, And what have you got in the way of a reply? Lots of little pieces of lead that come out of tube things on the underside of yo wings, that's what. Oh dear. Bullets are rather useless sometimes, aren't they?! (Yes, sometimes they are. Ed)

Each of its five levels are in monochrome, so the first question you'll probably want answered is "Does it suffer from the invisible-bullet syndrome?" I can report, happily, that no, it doesn't. (Well, not much anyway.) While the aeroplane sprites are all on the small side, the bullets, proportionately, are quite large. So, what exactly do you have to do then? Quite simple really - shoot absolutely everything that moves. There are both ground-based and airborne enemy craft to destroy - planes, tanks and gun emplacements to name but a few. And I suppose you'll be wanting to know what other firepower you have at your disposal in order to bring about all this carnage and destruction, won't you? Um, just the bullets, actually. No power-up icons in Scramble Spirits, matey. Well, as a matter of fact there is one type of add-on to be collected, namely a smart bomb. This doesn't mean that it 's particularly intelligent, it just means that when you let it off it blows everything in sight to kingdom come. These smart bombs certainly aid your progress, but, as you can only use each one twice (added to the fact that there are hardly millions of them lying around), they're best hung onto until you really need them. Mind you, this is easier said than done, because, once collected, the smart bomb attaches itself to the side of your plane. This makes you a bit wider, and therefore easier to hit, which means you might find the bomb getting blown up before you get the chance to use it to full effect.

There's a two player mode, which allows you and a chum to engage in shooting antics simultaneously. With one player guarding the left of the screen and the other the right, progress is made much simpler (and even more fun). Mind you, when a smart bomb icon comes into view it's going to be a bit of a scramble making sure that you're the one who actually gets it. In fact, you'll probably be killed for your troubles, so lean over and give your 'co-pilot' a quick back hander across the bridge of the nose. This should warn him off in the future.

All in all, Scramble Spirits is a rather enjoyable and absorbing little shoot-'em-up. For me, though, there's just one thing missing - and that's a few more extra weapons.

A monochromatic vertically-scrolling shoot-'em-up with the emphasis very firmly on, erm, aeroplanes. Quite good fun.

A monochromatic vertically-scrolling shoot-'em-up with the emphasis very firmly on, erm, aeroplanes. Quite good fun.