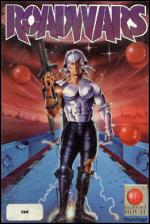 Their planet long since devastated by terrible war, the population of Armageddon now take refuge in colonies on the world's moons. Linking the moons and their colonies is a marvel of 25th century engineering, a network of computer-controlled magnetic roadways crossing space.

The network and its users are now in dire peril, because the computer maintaining the roads and their safety devices has run amok making them unsafe for traffic. The side panels which create the magnetic field and keep vehicles on the road are malfunctioning, sending large and deadly sparks across the road.

The task of destroying the blue rogue panels has been given to two robot battlespheres, each of which is placed under a player's control. The battlespheres are armed with a directable laser cannon for blasting panels and obstacles, and a retractable shield as defence against sparks. The shield is lowered to fire, and a hit from anything other than a spark destroys it, leaving the battlesphere unprotected.

Objects approach the battlespheres thick and fast. Balls and chevrons are capable of removing a player's shield or destroying his vehicle should he fail to avoid or shoot them. Running over an arrow bestows upon the player the ability to fire one extra shot at a time, up to a maximum of three.

Later roads pass by malfunctioning defeence satellites which unleash laser bolts across the tracks unless they are quickly disposed of.

To be honest I thought Roadwars was a lousy arcade game, and this conversion has lost its few good features. For a start, the graphics are very poor. Sprites that lack detail and unchanging backdrops make for a tedious visual experience, and the ears are similarly bored with some equally repetitive sound.

The standard: not only is Roadwars dull to play, it's also badly designed - the best tactic is to sit in one position and press Fire. Obviously 'playtesting' is a dirty word at Melbourne House.

Finally, the £10 price tag is a complete joke - I'd rather set fire to my money, at least I'd get more enjoyment out of it.

In the conversion process a weak arcade game has been transformed into an even weaker Commodore game. With two players, fun is in short supply, unlike single player mode... which is just a joke.

The computer player competes without the slightest hint of intelligence and persistently tries to bounce you onto the opposite side of the road, unless you know "the secret trick". This involves shunting the other battlesphere across to the far right of the road.

He then stays in that position until destroyed, intermittently pumping laser bolts into the panels on the left of the road, and leaving the player with the undemanding task of sitting in the centre of the road and pressing the Fire button for all he is worth.

Thus, he collects both of the extra shots and doesn't run any risk of crashing into balls (they are shot as soon as they come on screen), or chevrons (which always appear on the left of the road).

Another freak effect is brought to light on later levels, which I was allowed to play for only two or three seconds before I was whisked away to the next road for some reason. In one game, I was on level 14 in under two minutes! And the action was still the same as it had been on level four...!

The arcade Roadwars isn't spectacular, but something better than this could have been made of it. The graphics are terrible: the planet is static, the 3D update is mediocre, and the main sprites are badly drawn and bland, with minimal frames of movement.

The sound doesn't amount to much either: the music is energetic but nothing special and the sound effects are simple and annoying. Major faults lie with the control method (the presentation as a whole is weak), which is hopelessly clumsy because the reaction time is too slow, and the inter-level similarity: blasting rapidly becomes boring.

Even if you were a fan of the arcade version, avoid this like the plague.

Presentation 31%
A two-player option allows two players to feel all the tedium in half the time. Gun control is difficult with a joystick.

Hookability 22%
Possible interest for fans of the arcade game.

Lastability 16%
Extremely monotonous all round.

A complete joke. You'd get more enjoyment setting fire to a tenner than spending it on this.