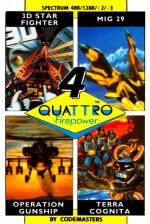 Another decent four-title compilation from the Codies, Quattro Firepower doesn't feature any classics, but has enough action to keep you occupied for some time.

Terra Cognita is the least wonderful of the titles; it looks like a decent vertically-scrolling alien shoot-'em-up, but has jerky movements and targets which are barely distinguishable against the mono background.

Mig 29 is an Afterburner-style aerial blast with decent animation, good use of colour and raving speed. Again, it's a bit too frantic to require more than a constant pressure on the fire button, but it's good fun.

The Oliver Twins' Operation Gunship reminds me of an old Broderbrund title, where you pilot a helicopter seen from above, destroying a series of enemy emplacement on a chain of islands. Plenty of detail makes this a good blast.

Lastly, 3D Starfighter, another Oliver effort, is a sort of Star Trek variant, featuring a 3-D flight through space followed by a difficult docking manoeuvre with your mothership as you refuel for the next fight against the evil Thargons.

Not a bad selection, then, and at the price, not to be missed.

What are you waiting for? Get this saucy package NOW and be a real all-American cookin' full-tilt boogie for freedom and justice.

Get this saucy package now and be a real all-American cookin' full-tilt boogie for freedom and justice.
Logout