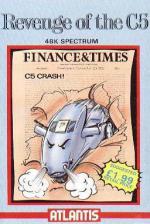 A certain bespectacled, balding, small person by the name of Clive is out to prove how reliable his electric car is after receiving more than a fair amount of bashing by nasty media people. To prove what a reliable and Milton Keynes form of transport his plastic pram is, he's entered it for the arduous and raucous annual cross country competition. Not wanting to be made to look silly and seeing a chance for yet another dig at the CE the press have laid in wait several anti-05 devices that should make the C5 driver's journey more than a little hairy. The country to be crossed is not what you would call 'nice' at all it's mostly roads but the obstructions within the roads are the things to be avoided. Electrically motorised connection with anything that's not particularly road-like results in a mixture of entrails and C5 plastic spread all over the street.

There are41 different sections to the course traversed by moving up the screen and being flicked into the next. Displayed from a very tall person's point of view, everything is seen from above. As in real life the controls for the C5 are far from comprehensive. Left and right comes in three different varieties: slow, medium and fast. Four keys are used, two for each direction, one is slow the other medium speed while both held in unison brings in a burst of mega turbo speed. Another key is supplied which adds pedal power to the weak battery, giving a bit of a boost.

The nasties planted by the press wander along predetermined paths on each screen and more often than not there's only one of them. On some screens a line of traffic presents a bit of a problem and careful speed control is needed to get past such sheets. Every tenth section a handy bonus screen is presented with the promise of lots of extra points dependent on your skill. The first, for instance, asks for the C5 to be parked in a trickily small garage.

Even though there are no other contestants in sight, it is a race and if all 41 screens are completed then a comment and placing is delivered to you and you can judge your own progress. Otherwise no rating is given and the next day the whole of the media will be poking fun at Clive's plastic wonder and you wouldn't want that would you?.

'Though the scenario is quite fun it's a shame the game doesn't really live up to it. It really is a horror from our computing past. Revenge of the C5 is one of the most tediously simple things that's been thrown my way for a long time. There are no outstanding features to be found however hard you may look. What's more ft's awkward, for some strange reason the A key is of some important significance to the game and repeated presses of it are required to move between various option and title screens, Compared to other budget releases Revenge of the C5 does look rather silty. Miss it at your fortune'

'I couldn't help laughing on reading the inlay - 'evil newspaper reporters' after the C5. This is a game which was written for a budget buy and the scenario and game suit the price. Going on looks, it looks like 'one of the first Spectrum games' (as an enquiring head muttered over my shoulder - it was Roger Kean, he should know). The game has flickery graphics and of course attribute problems, which could easily have been avoided. Revenge of the C5 has that certain amount of simple addictivity which occurred in games such as Roller Coaster and Jetpac, but I'm afraid it lacks in sound, graphics and presentation, all of which are of a very simple nature. It's very poor on all aspects but will require a lot of patience, memory and skill to complete it. You could be hooked after your first game but I shouldn't think you'd load it again'

'This is not the best Atlantis dame I have seen but it certainly isn't the worst. The idea behind it is quite fun although it isn't very original, win a race and dodge all the nasties. The graphics seem to suffer from inbuilt flicker which is pretty hard on the eyes after a while. The characters are undetailed and they move around the place abysmally but there are lots of them- the playing area is about the best feature of the graphics with bushes, houses, trees and the like by the side of the road or littering your path, which are all nicely drawn. The sound is pretty awful and there are no effects during the game itself other than the horrid sound when you crash your buggy, this horrid sound repeats itself on the title screen whenever you press a key. After forcing myself to play this one until I got a decent-ish score I discovered to my amazement that I was quite enjoying it. Quite a jolly game this one but I can't really see myself playing it for long.'

It's very poor in all aspects and it will require a lot of patience, memory and skill to complete it.