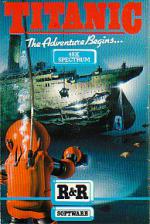 There have been recent programs out which have combined arcade with adventure games, ones like Phoenix's Dodge City, where you must complete the arcade game in order to play the adventure; and of course there have been arcade adventures like Atic Atac. Adventures tend to have a strategical element in them, but R&R are probably the first software house to come up with a multi-stage game which is both strategy and adventure in the accepted sense.

The game is split into three stages. The first is also the shortest and involves trying to raise sufficient finance to mount a search to locate the wreck of the famous Titanic ocean liner which sank on its maiden voyage on April 14, 1912, after striking an iceberg. The scenario suggests that a fabulous fortune in gold went down with the ship, and tha 's what you're out to recover. Initially you are presented with a menu of 15 institutions whom you may approach for finance, and the idea is to get the best deal you can. Each contract, if accepted, restricts you to finance from that institution only. The initial sum of money is given as an advance, with further sums to be awarded if you discover a wreck.

Having selected a backer and signed the contract by entering your name, it is time to spend the money on essentials, A NASA Satellite Photo (infra red) shows all large objects below the surface; you need food and supplies at a cost per day; you need teams of expert divers; and you need repair kits (quite a few actually), Once you have spent your allocation you may put to sea.

Stage two presents a map of the North Atlantic with coloured blocks representing events. You only get this if you have purchased a NASA photograph, as the blocks are large objects below the surface of the sea. These may be the sites of wrecks or icebergs..

Hitting an iceberg may result in sinking, but strikes can as often be repaired if you have sufficient kits. If a wreck is reported your financial backers will probably give you another advance and you have the option of ignoring the siting or sending a team of divers down. Once they dive, the message screen reports on their progress - it's dark down there - is the wreck the Titanic - or will they be killed? Your backers are understandably disinclined to come up with a further advance on sitting a second wreck, if you've already lost one team of divers!

Discovering the site of the Titanic's last resting position switches you into stage three, the exploration. You are only able to explore one level at a time, and there are three. A simple 3D line drawing above the text shows the location. Commands do not have to be entered. The possible directions and location description are all combined. Pressing the desired direction key causes an instant response and carrying out of the command. Ideal locations to find are the service rooms on each deck, as these have deck plans of the ship. With something like 170 locations per deck, the plan is a valuable help. There are several types of hazard down there, and losing a team of divers can be catastrophic if you only have one left and not enough money to get back for another team.

'With 17 located possible sites (courtesy of NASA) and most of them being icebergs or lethal World War 2 wrecks, finding the last resting place of the Titanic can be very frustrating indeed, and take some time and several goes. Each time you try the blocks change place and what they represent is randomly selected, so experience is only gained in how to use your money for buying supplies, etc. I found the most useful items were the expensive repair kits - hit an iceberg without one and that's that. The adventure, when finally reached, is quite straight forward, and I missed some atmospheric descriptions. On the other hand it makes up for it by the enormous number of locations to be searched, and there is still the strategy element in using your diving teams to their best advantage. Mine got crushed by a collapsing deck - they were only my fifteenth team...'

'It's nice to see R&R Software as a possible institution to approach for money! My first go at the game they offered the biggest sum of money on the board in return for buying all their games for the next five years! Second try, and they just said, "Sorry!" No reflection, l hope, on my skill as a marine salvage expert! Stage 1 does require a bit of careful planning and thinking, in spending your advance money. A NASA photo is essential, but !eaves insufficient funds to easily purchase both enough diving teams and the essential repair kits -in this game the North Atlantic looks like a Scotch on the rocks, all of ice cubes! The adventure part is fun, although for a long time it seems like you are just going round in circles, and unless you come across a deck plan, it 's sensible to keep a drawn map going. R&R say that anyone finding the gold should donate some to their programmers' retirement fund. The song on the reverse side of the tape is very good. I thought Titanic was quite an interesting combination of games.'

'The graphics are all very dear and well laid out, with instant response times on the adventure. The graphics are quickly built up, most being outline drawings. It's fun to play, but I felt the adventure hadn't got quite enough going for it to be totally compulsive, and it turns more into a watery exploration without the relief of interesting location descriptions. This one's quite a good family game.'

It's fun to play, but I felt the adventure hadn't got quite enough going for it to be totally compulsive, and it turns more into a watery exploration without the relief of interesting location descriptions.