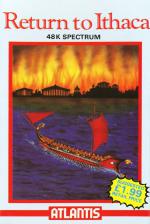 Sailors' tales always grow in the telling. Tall stories of sea-beasts, strange lands, magic and monsters have probably been around since someone first got the idea to hollow out a tree trunk and float away down river.

The ancient Greeks, being sharp traders and daring seamen, were particularly partial to such nautical fantasies - twenty-five centuries or so ago you could have wandered into a dockside bar in the Greek port at Maresilles and listened to the story of the crazy explorer who claimed to have sailed so far north that he's discovered an island called Britain and, further north still, a place where the sea froze. This bit would always get them rolling around helplessly with laughter and calling for more retsina.

Nobody believed such stuff, of course, probably because they'd all taken in the tallest story of all - the Odyssey, a mixture of bizarre traveller's tales held together by the central theme of Odysseus' return home from the Trojan War.

This Odysseus, a crafty and fairly vicious pirate who called himself King of the Isle of Ithaca, had got up the gods' noses somewhat by devising the idea of the Trojan Horse and bringing about the ruin of their precious city of Troy.

So when he loaded up his war-galley with loot he may fondly have believed that he'd be back home with his wife Penelope in a few weeks or so. The gods had other plans and saw to it that he spent the next ten years going from danger to danger.

Return to Ithaca from Atlantis software lets you retrace Odysseus' journey and relive his exploits amongst the drug-crazed Lotus Eaters, cannibalistic Laestrygonians and the renowned Cyclops.

The game is Quilled text with some location graphics, mainly to depict new landfalls. Not surprisingly you begin on the sea-shore beside the burning towers of Troy. There you get your sword and board your galley. Check your inventory carefully and you'll pretty quickly have the sword tucked in your belt. Sailing is another matter - the description of the ship doesn't include all the details.

Set sail and you'll be carried to the land of the Lotus Easters, a strange tribe who thrive on hallucinogenic fruits. There, within the maze which can be tricky if not mapped, can be found a barrel of wine. You're going to need that wine at your next stop - the island of Polyphemus - where you'll find the Cyclops, a voracious giant who's quite happy with a snack of sailor pie.

Quite possibly you'll go back to the ship with your wine clutched in your hot little hand only to find yourself stranded forever amongst the laid-back Lotus Easters. There's your trusty ship, a speck on the horizon. Forgot to drop anchor didn't you? There are a number of tricks like this dotted around the game and you'll quickly learn to be careful and apply logic to the proceedings.

If you know the Odyssey legend you'll remember that Polyphemus was disposed of in quite a complicated way. The program uses a different and more simple method to get out of his clutches so don't assume that because you've read the book you can walk through the game.

In general though it does stick to the original storyline, ideally suited to a text-only style. At times I felt more could have been made of the sea-travel - once you've upped anchor you are simply transported to the next destination and don't need to navigate your way around the ancient Mediterranean. This seemed a shame as it would have been more entertaining to find correct routes, even if it meant visiting places at the 'wrong' time in the story. Certainly it would have given a more open feel to the play.

Descriptions aren't too bad. They can get quite lengthy and often contain concealed information. More could have been made of the strange scenes, however, and the horror of Polyphemus' cave was not played up to its full extent.

The graphics are full-screen Illustrator type. They are pleasant enough and use repeated routines for quite a few of the locations, placing the same ship in varied landscapes.

Not enough has been done to alter the basic Quill messages and Examine too often gets the I can't response - again slightly more detail would have enhanced the feel.

Despite these criticisms. I enjoyed playing Return to Ithaca. It's not a mind bender but the story is familiar and the approach intelligent.

What's more it's cheap, so the combination could be irresistible to those on a tight budget.

Fairly basic Quilled adventure. it won't take you ten years to finish but you'll get your money's worth.

A fairly basic Quilled adventure. It won't take you ten years to finish but you'll get your money's worth.