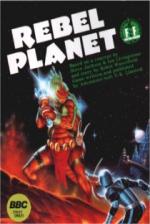 You are Tarann, last of the Earth heroes, engaged in one last, desperate attempt to break the stranglehold of the loathsome Arcadian empire on the galaxy.

Your quest, to destroy the Arcadian queen computer. Your weapon, a forbidden laser sword. Your opponents, many. Your chances, pretty remote - as far as I can see.

Rebel Planet is a text adventure which may not have been Quilled, but it certainly has that feel, with all the clumsiness of response you get from adventures written according to a preset formula. You are confronted with "Sorry, I'm confused" frustratingly often when the program doesn't recognize your input, but at least there's a fair variety of "You can't do that"-type messages.

There are one or two home-made touches which really shouldn't appear in a commercial product: sentences occasionally get duplicated, or words wrap round badly, with single characters being taken over on to the next line. On at least one occasion, the program told me an object was in view, then proceeded to deny it when I tried to pick it up.

That's what I don't like about Rebel Planet. What I do like about Rebel Planet is the ingenuity of the puzzles and the liveliness of the scenario. You start on the flight deck of the merchant ship Caydia, disguised as a travelling merchant. The ship seems to be deserted except for domestic droids which scurry around cleaning the place. You must explore, pick up what's going, top up your protein and energy levels, then disembark on to planet Tropos to make your first contact with the underground resistance.

Simple enough, you might think - only it wasn't. I never did get to grips with the tortuous workings of the author's mind. I died of starvation six times before I gave up trying to find the card that operated the sustenance machine, and turned to chewing the carpet instead...

That's what it's all about, of course. A good adventure should grip, and Rebel Planet is certainly gripping. I just wish something could be done about the constraints of the framework within which so many adventures these days seem to be written.

A good adventure should grip, and Rebel Planet is certainly gripping. I never did get to grips with the tortuous workings of the author's mind.