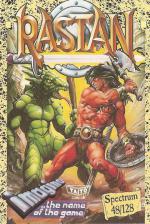 If I see just one more bloke with well-muscled legs and a fur cod-piece I think I'm going to pass out. The office is full of 'em!

I hasten to add that all the 'hunks' in question are sprites on t'computer. It's becoming very much the norm to come of of a morning and find a new hero on my desk. We've had Thundercats, we've had Flintstones, we've had He-Man. And now we've got Rastan.

Yup, deprived of his 'Saga' (it was only ever B-movies anyway) Rastan now comes to our screens in a manly fashion ready to slash and hack his way across landscapes literally pulsating with creepy crawlies of varying sorts. The story-line won't interest you, it's all about lost thrones, evil wizards and absolute power corrupting absolutely, and all the rest of that sort of tosh, but what it all boils down to is that Rastan has to confront Karg in the guise of the evil soul-sucking dragon.

OK, complete twaddle aside, what's the game like? If you've played Rastan Saga in the arcades, you'll be quite surprised at how well the conversion has been done. Rastan is nicely animated even down to characteristic walk, knees firmly together, sword held up and behind him. THe ghoulies are all there, the haughty lions stalking back and forth (although sadly without the snakes riding on their backs), the crazed bone-twirling skeletons, and the manic, blood-sucking bats that just want to get into that little crevice under your armpit. All there and nicely detailed.

What is a little disconcerting is the use of monochrome. Attribute clash is avoided, certainly, but this unfortunately leaves open the problem of not being able to see the approaching enemy. And because things move at a phenomenally fast pace (this is a man with a mission and a half, folks) you're more than likely to walk straight up the nearest man-eating bat. Still, if you like your games to move at a good lick, Rastan's the one for you.

Not only are the goodies and the baddies faithful copies of their original counterparts, but the landscapes aren't bad either. Nice lines in rockery, indoor castle scenes and pools of lava and fast-flowing rivers, coupled with some rather nifty flying rocks and swinging ropes make everything suitably atmospheric.

Along the way there are various bonus icons to collect, each lasting a short period of time, giving extra strength, more life or extra swings to your chopper. Look out too for the sword of dire and the very large axe that seems to do an inordinate amount of damage.

I liked Rastan Sage, probably mainly because it was the one coin-op in the arcades on which I could be sure of beating the lads. Now, I must confess, I like Rastan on the Spectrum. He's big, he's bad, he's got that cod-piece and he's looking good. There are some that think that the game's a trifle 'samey' graphics-wise, but I don't give a tinker's cuss. THe action's all there and the gameplay is first class. Now, where's me broadsword and fur boots? I'm off to do some slashing...

Impressive conversion of one of my all time favourites. Get out that broadsword and boogie!

Impressive conversion of one of my all time favourites. Get out that broadsword and boogie!