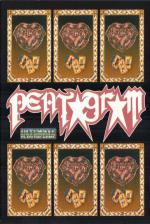 There was a time when the release of a new game from Ultimate was a major event. A time when it seemed Tim Stamper and his team could do no wrong.

Certainly Sabre Wulf, Underwurlde, Knight Lore and Alien 8 must rank amongst the best games for the Spectrum ever. So what of the latest release from Ultimate, Pentagram? Can it mae up for the extremely disappointing Cyberun, which marked a retrograde step, using Jet Man style graphics?

Well, I'm afraid that the answer is a resounding maybe.

Pentagram is in fact a slightly changed version of Knight Lore. "So what?" I hear you cry - Alien 8 was too, and that's great!

Maybe it's OK to copy your hit once. But twice?

Alien 8, while sharing a common graphic style and underlying structure, had a totally different plot line and very inventive screens, all high-tech space ship backgrounds and angular robots as opposed to the gothic medievalism of Knight Lore.

Unfortunately Pentagram looks like some poor minion has been handed Ultimate's Graphic Adventure System, shown Knight Lore, and told to deliver a best-selling game by the previous Friday.

I may be being unfair but the graphics certainly look rather simplistic compared to the other two games. Our hero the Sabreman is wrapped from head to foot in a cloak, which avoids the need for any fine detail. Not only that, but the monsters are distinctly disappointing too - spiders with stubby legs, rather primitive-looking sheet-style ghosts, and distinctly dull Frankenstein monster lookalikes.

The backgrounds, too, seem to be lacking in imagination, being basically rehashed from Knight Lore: the furniture has been changed, but only slightly - sawn off tree trunks replacing chests, and giant mantraps instead of enormous spikes.

As for the problems, we've seen them before: None of the "how the hell do I get through this?", more "ho hum, another one of those".

The only major difference in Pentagram is that you are at the mercy of wandering monsters as well as the inhabitants of the rooms: if you stay somewhere too long, a new creepy crawly materialises. Some of them are more dangerous than others - the ghosts just push you around, while just about everything else zaps you if you collide with them.

The addition of these roving killers makes it very difficult to survive at first - which is obviously the idea.

But, cynic that I am, I can't help feeling that it's another example of the laziness that seems to underlie the game - make it more difficult by adding more monsters which appear randomly and you don't have to bother with designing elegant puzzles.

What the plot of the game is I really can't tell you, beyond saying that it has something to do with searching for a mystic pentagram, and that somehow you will be able to get clues and/or help from the various wishing wells dotted around the game.

Basically, it all boils down to a matter of invention. Two's company, three's a crowd and there's nowhere near enough new material in Pentagram to excite me. Of course, it has to be admitted that it is far better than many of the run-of-the-mill Spectrum games around. The question does remain, though; How long can Ultimate rely on being the only company in the market capable of sophisticated graphics like this?

If they want to get back in the lead, they're going to have to bring back the sense of wonder that their best games invoked in people.

Technically very good, but lacking in imagination. Sadly, it's another serious disappointment from Ultimate.

Technically very good, but lacking in imagination. Sadly, it's another serious disappointment from Ultimate.