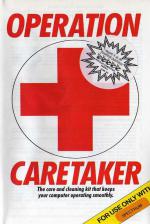 IT IS OFTEN impossible to know what to do if a program crashes, or won't load. How many times can you face taking a duff tape back to the shop and asking for a new one?

What many people forget is it could easily be the tape recorder causing the problem. Tape is grotty stuff. The oxides rub off on the heads and make a mess - it's like sandpaper. Also, the heads come adrift and change position. The alignment of the heads is called the azimuth, and Global has produced a piece of software to cure all ills.

Operation Caretaker contains two cassettes and a screw driver. One cassette is a tape cleaner, a strip of fibrous material which rubs against the heads and collects the filth.

The second cassette is a program which sends out a steady stream of data and then interprets it. The data is sent through at a high speed to make it difficult to read, and a display shows you how many bytes were accurately read. You then stick the screwdriver into the azimuth screw on the tape deck and twiddle it until the readings are as good as you can get.

They tend to be a little different on each side of the tape, which is confusing, but there should be a narrow area where both are at their best. That's the point you want. As far as we could test it, the program seemed to work.

Of course, the program is fairly useless if you haven't got a cassette recorder with a little hole in it for adjusting the tape heads.

The package will remove a great deal of aggravation with tapes which won't load. Next time you go down to the shops to complain, you'll know you're in the right.

As far as we could test it, the program seemed to work. Of course, the program is fairly useless if you haven't got a cassette recorder with a little hole in it for adjusting the tape heads.