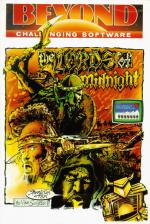 The Lords of Midnight

The armies of Doomdark are rising, swarming like locusts over the plains and passes of the land of Midnight, bringing with them the ice-fear, which drains the soul of courage and renders the bold sword arm numb with fear. Midnight's last hope is Prince Luxor, holder of the powerful moonstone. That, as if you had no guessed, is where you come in.

Lords Of Midnight is a truly epic adventure from Beyond Software. You play the pan of Prince Luxor and his allies, whose movements you control through the telepathic power of the moonstone. During the day you, and those you have won to your cause, travel the land raising armies, fighting battles, and sending ambassadors to recruit more Lords to your side.

The most striking feature is the superb graphics system, whereby the screen displays your view of the land from where you stand. Distant objects become bigger as you move towards them and you will need to develop a keen eye to spot significant features on the distant horizon. Fortunately, you are provided with a map of the Land of Midnight to help you plan your campaign, although deliberately it omits many features and gives only an approximate indication of distances.

The graphics are built of standard pictures for various parts of the landscape; it is claimed that there are 32,000 possible views, all different in some respect from each other. Fortunately there is sufficient variety and detail in the pictures to sustain interest and the information contained in them is vital to the game, as there is very little accompanying text.

Unlike most adventures, Lords Of Midnight is not played with pseudo-English commands but with a keyboard overlay setting out your options. In certain circumstances the "CHOOSE" option will provide a menu of further decisions, such as initiating a battle or recruiting men. Those decisions depend on the qualities of individual characters; if a commander is very frightened, he will be less likely to consider joining a battle. Likewise, movement is determined by terrain and physical stamina. The system of menus may appear slightly confusing at first but rapidly becomes easy to use and the response time is excellent, with pictures generated almost instantaneously.

There are two distinct types of game combined in Lords Of Midnight. First, there is a quest, as Luxor's son Morkin is set the task of travelling into the heart of the realm of Doomdark to seize and destroy the ice-crown, the source of all evil power. Only Morkin is pure and bold enough to do that.

Second, Luxor and his armies must attempt to conquer Doomdark militarily, or at least prevent the enemy capturing the key citadel of Xajorkith. Thus the game can be played either as a war game or as a quest but both elements, affect each other, for the war may distract Doomdark's armies from Morkin, and the closer Morkin gets to success, the less Doomdark can direct his ice-fear against Luxor's armies.

If you love fantasy and wish to immerse yourself in a genuine tale of epic adventure, Lords of Midnight will provide as authentic a taste of Tolkien or Donaldson as any game yet produced.

The Lords of Midnight

Will provide as authentic a taste of Tolkien or Donaldson as any game yet produced.