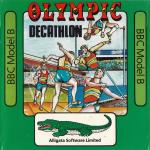 Olympic Decathlon is one of those games which will appeal to those who love sports, but cannot find the energy to go out and inflict any of the sports depicted in this game.

In fact, so realistic are some of the games, that I ended up making the same old mistakes in the game as what I ended up doing at school athletics.

Anyway, I must confess that I am not really a lover of athletics, and even less at sports simulations, but this game has got me hooked, perhaps because the game is well written, with a number of different sports to play from, normally ranging between running, jumping and throwing sports.

The graphics are very good, and there is some nice music, which I am afraid, cannot be turned off. It is also quite loud, so I wouldn't recommend it for midnight playing.

Probably the most popular option will be to practise individual games, I still haven't been able to break any world records, bar the discus championship, which is, probably the easiest game to start with, as it involves throwing.

If you have a joystick, then I would strongly recommend that you use it, as the keys come under some hefty bashing. You can always tell the Decathlon games in the arcade as the players are the ones smashing the hell out of the keypads, and none of the bouncers seem to mind.

The game boasts some very smooth sideways scrolling and some clever advertisements, but the game becomes even more exciting when it comes to the 100 metre dash, as you have to pit your wits between both qualifying times and the computer opponent.

The games are played by a menu, and then loaded from disc, which means that the individual games can afford to be detailed. "Running" is very difficult but Shotput, Javelin and Discus, are by comparison quite easy, Hurdles and Long Jump are also quite difficult but by far the hardest are Pole Vault and High Jump which require very precise action... still I'll get over the beams in the end.

Olympic Decathlon is a game I would recommend, simply because it is so realistic at times. If you are daunted by games that at first seem impossible, then don't go for it, but I'm hooked and I don't even like competing sports; anyway, must dash, I'm competing in the 100 metre race this afternoon.

If you are daunted by games that at first seem impossible, then don't go for it, but I'm hooked.