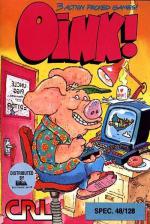 Problems, problems. What do I call this game? Do I put it in the Arcade action of the reviews, or do I put it in the Simulation section? For yes, believe it or not, Oink is an exact simulation of how comics and magazines are put together. Yes, it's true. You may think that we (ie The SU team) ) spend all day slaving over hot typewriters, brains pouring out of our ears trying to get away from the serious thinking that is left on their shoulders (!?!), but no. (Tony this is madness start the review again and see me after school G.T.)

In Oink you have to send assorted comic strip characters out to find the missing page panels before the copy date otherwise you'll, "Run out of Piggin' time". Each character enters their own mini arcade games and tries to get as many panels back as possible to fill the 9 pages in the magazine.

The first game is Pete's Pimple, or to put it another way, Breakout. You must bounce Pete's spot around the screen, knocking out the bricks and collecting bonus panels. Dill's verdict on this part: trash. The ball only moves in two directions and you can't destroy the killer fish that sly towards you all the time - it's frustratingly hard for no good reason.

The second game is Rubbishman. Fly Rubbishman over and under obstacles along a very slow scrolling backdrop very similar to Uridium, except nowhere near as good. Dill's verdict: Crud. You have indication of the height of the obstacles and no matter ho far you get, you still go back to the start when you die.

The next game's hero is one Tom Thug who has to drive his thugmobile around a large flip-screen area, shooting nasties and collecting panels. Dill's verdict: a very poor Anarchy imitation. The main character moves far too slowly and the game itself is completely unplayable.

Though it is absolute rubbish and the individual sections are laughably bad. You get an odd satisfaction when you complete a page and you are given the opportunity to read the comic.

Slow, unplayable, graphically poor and generally crap. Still, it's a lot of fun.

Slow, unplayable, graphically poor and generally crap. Still, it's a lot of fun.