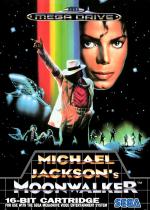 The man with the glove is back, and this time, he's brought his chimp. Yep, Michael Jackson is out to save the children of the world from the evil clutches of Mr. Big and his cronies, before he subjects them to all sorts of twisted tortures (eek!).

Jacko travels through five levels (each consisting of three sub-levels) of platform action, before confronting Mr. Big himself on the sixth. Michael isn't powerless, however, and has deadly stardust at his disposal to blow away any opponents. If things get a bit too hairy, however, our Mike has three levels of magic (which act like smart bombs) to knock out any bad guys on-screen.

Every so often, a falling star will appear, and if your hero can catch it in time, it will transform him into a giant silver robot, equipped with laser cannons and a rocket pack!

Once all the kids have been rescued, Bubbles the chimp will jump onto Michael's shoulder, and direct him towards the end of the level where a nasty guardian keeps the entrance to the next level covered. Success will mean freedom for the kids (and a new album from Mike, no doubt), failure will mean doom and destruction (and two new albums - sorry, only kidding...)

Aaow! There's only one description for this - it's bad! Right from the outset, the presentation makes Moonwalker a treat to play. The visuals are great, especially the moonwalking, spinning, grooving-around Michael sprite.

The smart bomb feature is hilarious, especially when it's powered right up so that the bad guys start boogying to the relevant tune before going splat!

The music is what sets Moonwalker head and shoulders above other games of this type - the sound. Note-perfect renditions of Billie Jean, Smooth Criminal, Bad, Thriller, Beat It and Another Part Of Me thump out of the speakers, and the inclusion of various howls, oohs and other Jackson-type sound effects add further to the atmosphere.

My only niggles are that the gameplay itself is rather simplistic (climb around the platform, blat a few nasties, rescue the kids) and a tad repetitive, and the level six space shoot-'em-up is a bit of an anti-climax, but the audio-visual aspect more than makes up for this.

Right from the outset, the presentation makes Moonwalker a treat to play. The visuals are great, especially the moonwalking, spinning, grooving-around Michael sprite.