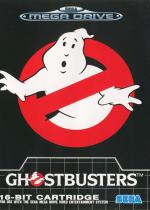 If I had a penny for every time a Ghostbusters review started with "Who ya gonna call?", I'd have enough to buy an extra Mars Bar at lunchtime by now. Luckily, this is a quality magazine, and I wouldn't seek to insult your intelligence with such a cliched opening.

Anyway, phantoms are causing panic in the city of New York, so who you gonna call? (Ker-ching!) Why, the Ghostbusters of course. Those three way-out, whacky "spook-cops" are here to clean up the city, and make a lot of money along the way.

Controlling either Peter Venkman, Ray Stantz or Egon Spengler, you've got to travel from house to house blasting ghouls and avoiding traps. The action is seen side-on, with the 'buster of your choice jumping along platforms and avoiding holes in the floor.

Each character is equipped with a positron gun which he can shoot in all directions, making it easier to fry the ghosts that fly overhead. Blowing away a ghost puts money in your account, and this can be spent on upgrading your weapon from a measly single shot pop-gun to a whopping great proton cannon. The money can also be used to buy food (to replace lost energy), infra-red goggles, bombs (handy for wiping out big ghosts) and protective shields.

Each house contains a certain number of 'middle ghosts', which have to be disposed of by blasting away until only a wimpy green slimer is left. This has to be caught with the proton beam, and dragged into the trap, which sucks the ghost in. Take too long, however, and the spook escapes. Once these have been dealt with, you move on to the end-of-level ghoulie, which can be anything from a green sphere-like spectre, to Mr. Stay-Puft, the Marshmallow Man!

If you were expecting it to be a straight conversion of the Master System Ghostbusters, you'll be surprised to find that the Megadrive game is completely different, with much more action of the "jump-and-blast" variety.

The graphics are really good (each 'buster looks like his movie counterpart) and the in-game music is nice, if a little inappropriate. The title music is a major let-down though, because, rather than put the ten-channel stereo to work and make a really funky version of the Ray Parker Jr. soundtrack, it sounds all tinkly and flat.

The game itself is a bit of a killer, too. Even on the easy level, it's blimmin' hard work just to try to knock out the middle ghosts, so it's not the easiest game to get into!

Strangely enough, however, Ghostbusters has a supernatural addictive quality about it that grabs you and keeps you stuck to your screen for quite some time. Definitely worth putting on the shopping list.

It's not the easiest game to get into, because it's blimmin' hard work, but Ghostbusters has a supernatural addictive quality about it that grabs you and keeps you stuck to your screen for quite some time.