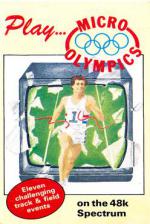 Database are the publishers of Micro User, the BBC Micro users magazine, and this program is a successful translation from their Beeb version, and their first excursion into Spectrum territory. Olympics year seems to have resulted in a wetter of track sporting simulations of the interactive sod, CRL did an Olympics program, even Automata put the Piman through the wringer. There's Stickman Olympics from Avalon and Athlete by Buffer Micro. All of them have been aiming at the popular arcade version which has the player thumping hell out of the machine (usually cracking the front glass in frustration after losing!), but this is the one that really matches up, and deserves a good placing beside Psion's Match Point.

There are eleven events to be entered into from the main menu, five of which come under one key press for running events. These include the 100, 200, 400, 800 and 1,500 metres. The three throwing events are Javelin, Discus and Hammer; and then there's the long and high jump and the pole vault. In each event you can compare your result with current world records.

Each event takes place against the computer with the computer (ME) going first and you (YOU) going second, although in the running events you compete simultaneously of course. Most events require the use of three keys, all of which can be user-defined at the start of each event. Running is accomplished, as in the arcade version, by hitting a left and right key as fast as possible. There is a book on Spectrum programming written specially for very young children which in its first chapter tells the child how to take care of the computer, pointing out that thumping the keys, the way those silly games players do, is bound to ruin Spectrum'. Needless to say, Micro Olympics is Database's subversive way of attempting to destroy everyone's Spectrum so you'll go out and buy a Beeb next time around!

Control keys: user-definable
Joystick: no option but most key mapped protocols can be used via UDK
Keyboard play: responsive if not violent
Use of colour: very good
Graphics: large and very well animated characters with multiple colouring used
Sound: not much, but the applause works very well, although chopped off at the end like some Monty Python effect!
Skill levels: 1
Screens: 7
Originality: a good version of the arcade game

'This is the best of the athletic type games I have seen. It's got more realism than the rest and is generally more fun. But I would like to point out that the Sinclair ZX Spectrum keyboard was not designed for rapid finger movements. Therefore I suggest that a joystick should be used - no option however, so the joystick interface must be programmable and preferably one with two independent fire buttons as these would be better than actually thrashing the joystick to death! Another point is that in true sporting style you must finish any event you start. This resulted in a lengthy key bash for the 1500 metres. Generally a good game but not designed for keyboard play.'

'This game is an adaptation of Track & Field, the well-known arcade game, the one where you must push and pull the joystick as hard as you can. Not surprisingly, these machines have a short existence! I found a joystick a lot easier to use with the definable keys (mine was set to Protek protocol). You really do have to move the joystick fast to get your man moving well - don't go in for the 1500 metres - you've been warned! The graphics are good and work well in most cases. The sound is good, with the crowd cheering even after a no-throw. I was a bit disappointed there was no twoplayer option, but a nice feature is when you throw the hammer or discus and release it at the wrong moment - the screen goes blank and cracked in the middle and says your picture will be returned as soon as possible.'

'So far none of the Olympics games brought out for the Spectrum have been really worthwhile playing and were not very interactive with the player. But this version, very similar to Track & Field, should provide amusement for quite a while. The only reason forgiving up might be a tired keyboard or wrist. Graphics are very well animated and colourd, general colour and sound has been put to good use. Your computer opponent is pretty good, but he can be beaten.'

Graphics are very well animated and coloured; general colour and sound has been put to good use. Your computer opponent is pretty good, but he can be beaten.