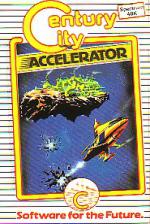 This game has a commendably brief inlay as far as the typical blurb goes, and confines its bigger flights of fantasy to the on-screen instructions which tell you that it is the end of the 25th century and the human race is in the worst state of decline since the end of the 20th century. Ravaged by a 200 year war with the alien confederates, the remnants of our once great race are scattered throughout the universe, on remote, barren hostile Planets. The only planet inhabited by humans that is not reverting to the cave era is Sol. From Sol come scoutships.

Their missions: to boldly go where no scoutships have gone before. Their task: to locate the last human settlements. It is from one of these missions that your ship, The United States of Sol scoutship Accelerator, encounters a massive alien fleet. Too late to run, you have no choice but to perform the first strategy of defence-attack! And if you think you've heard something like this before, please don't write in to say so!

What Accelerator turns out to be is a space shoot em up of the old school but with up to date graphics. It plays not unlike Arcadia, but your ship is free to move all over the screen as well as firing forwards or backwards. The attack waves of aliens come from either side, but in one direction per wave, crossing and re-crossing the screen until all are dead. Each wave provides a different alien type, some of them very large, and they are all firing constantly. The space war takes place against a scrolling background of stars, and the only other features are three mines sown diagonally across the screen, which will explode your ship should you hit one. Score, hi-score, lives and fuel remaining are shown at the bottom of the screen. Fuel equals bullets, and when it has run out, so has your time until a wave is cleared.

'This takes me back to the early days of arcade games - that's not saying the game is primitive because the graphics are of the fast, smooth moving type, and are also very detailed, really quite lovely in fact. This game is a definite shoot em up game with no wandering either side, just mindless blow em to smithereens. It starts off fairly easily with large battleships to blow up and it continually gets more difficult as the enemy comes in larger quantities, at faster rates and in smaller vessels. Accelerator is an incredibly hi-scoring game and will probably appeal to the type of person who loves high scores.'

'Shoot em ups are getting rarer by the day. There is still a place for them, but it's hard to feel thrilled if the graphics are poor (as they used to be). Accelerator is not let down on that score with varied and detailed characters zapping each other against a background of deep space, using powerful and colourful lasers of the type more commonly seen in Lunar Landscapes. The explosions, too, are very realistic and the sound works to help the atmosphere. In other words, this game is a good shoot em up of the old type, and if you like em, you'll like this one. Overall, quite nicely done, playable, but perhaps not very addictive.'

'I'm not sure whether there is still a market for simple shoot em up games these days, but Accelerator being a cheapie, it will probably sell in large quantities because the graphics are nicely produced, and vary from wave to wave, some of them looking like ships out of Blake's 7. Reading the instructions for this game, the thought came to me, why is it always me, and solely me, that has to save the universe? I must be a great hero by now, having saved so many universes, but no mind, it's all in the average day's work of an average person. Several features I like about this game, which I have not seen before, include the starry background scrolling behind the foreground of starfighter ships, a very effective and neat addition. Probably, without this effect it could make the game tiring to play, it does seem to break the monotony of the black background. Another feature is that when a wave attacks you it does not attack all at the same speed as most of these games do, but at varying speeds from snail's pace to warp speed, and in cases where the spaceships are tiny, this can pose several problems in trying to zap them. Another neat feature is the fuel counter. It does not drop by itself but instead, every time you fire your laser your fuel count is reduced by one, so care is needed in zapping. To sum up, it can be called a fast, rigorous, sole shoot em up game, quite neat but possibly it isn't totally addictive, but then again, how many cheapies are? It is the type of product where you play continuously for a day or so and then throw it away in the bin.'

A fast, rigorous, sole shoot-'em-up game... quite neat but possibly it isn't totally addictive... the type of product where you play continuously for a day or so and then throw it away in the bin.