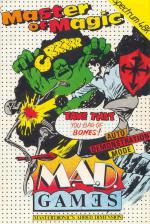 Mastertronic has produced some excellent games and Master of Magic could well turn out to be another winner.

It's an adventure, but one with a difference. Firstly, to set the scene: you, an unfortunate explorer of underground caverns, have negligently strayed too close to a 'deep black pool'. A hand has dragged you under the water, and you have found yourself trapped in a land of mystery by Thelric, the Master of Magic. Only he can return you to your world, and before he does you must find the lost Amulet of Immortality for him.

Once loaded and past the introductory pages, the screen is divided into four areas. The top half contains two windows: on the right is a scroll, which is used for descriptions of events - usually fights. On the left, you have a very small map of the immediate area you are in. This is a floor plan showing you what you can see - quite literally. You get a torchlight line-of-sight effect, which means that, standing by a door you can see down a corridor and part of a room; move into the room and you can see more, but you may not be able to see the corridor any more.

You, by the way, are represented by a white pixel on the purple map background. Monsters are also represented in white, but usually you can tell which is which by the shape of the character - a bat is vaguely bat-shaped, etc.

You control your movement either by joystick or by keyboard, and your little white pixel reacts accordingly.

Below the map and the scroll is another window, about four or five lines deep. When you want to do something other than movement - cast spells, pick something up, attack something etc - you call up a menu of options and cycle through them. Below that window is yet another - the final window: this time a sort of display which give you 'close ups' of whatever else is in your immediate vicinity - skeletons, hellhounds, bats, vampires, etc.

How about the game itself? I have to admit I was pleasantly surprised. It's really quite fine. It is very easy to get involved in the adventure and you tend to forget that you're actually controlling the destiny of a little white pixel and not some brawny Conan-type adventurer.

Pretty soon, you're really into hacking down evil bats and slaughtering slavering hellhounds. OK, so maybe it's not so much fun having the life drained out of you by the vampire, but I'm sure I'll work out how to get the better of it at some point.

And, so far, I've no complaints about programming, either. My only slight discontent is the map - I'd have liked it to have been bigger.

In some ways, Master of Magic reminds me very strongly of a program I saw about 18 months ago - I can't remember the name of it, but it involved a very similar use of line-of-sight on a map much like the one in this game, except that a lot of the action took place outdoors.

Master of Magic, however, is a far better game.

Another budget winner from Mastertronic. The adventure is quick, clean and pretty challenging.

Another budget winner from Mastertronic. The adventure is quick, clean and pretty challenging.