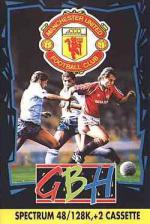 Come on you Reee-eds! Get those teams into training because it's time to kick off with Manchester United, the football game. And what a game it is too!

Originally released by Krisails during the heady days of the 1990 World Cup, Manchester United was one of the best management simulations on the market and at this budget price, it still is. The game gives you a chance to really manage a football team without having to don a sheepskin coat, chew gum or get involved with any of the normal News of the World type bedroom scandals. Oh no.

Manage your team by picking the squads, supervising training, playing the transfer market and generally taking on the role of the cigar-smoking, wheeler dealing manager that we've all come to expect.

As well as a being a management simulation, Man United also gives you a chance to take part in each of the arcade style matches that the team play. If you do decide to take up the gauntlet you won't be disappointed. The arcade section is almost a bonus game with corners, free kicks, variable power of shots and a genuine 'arcade' feel.

It's really this section that shows the amount of thought that's gone into Man.U. You can just leave the joystick alone and watch your team battle it out, hoping that the up through training will guarantee you the result you're after.

If not, then it's back to the training sessions, transfer market, fixtures and player information, all accessed by the use of excellent on screen icons instead of reading the back pages of the Sunday newspapers.

The management part of Man United is quick and control is straight forward (not literally of course), whereas the joystick wrenching optional arcade section puts many a genuine arcade football game to shame.

It's more than just a ruddy good simulation. It's a complete football game.