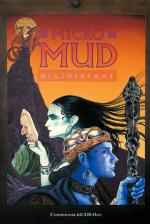 Since its inception in 1980, MUD has developed into a cult far beyond original expectations. The Multi-User Dungeon is available by Commodore 64/128 owners by logging onto Muse Ltd and is a challenging adventure in which users may interact with players who are simultaneously logged on.

Micro MUD attempts to emulate the gameplay of the original, but the data is stored on disk rather than accessed via modem. This limits the game - but to what extent?

Micro MUD is purported to contain nearly every detail of Essex University's MUD. The player is pitted against 100 others, 10 of whom may play at the same time. Vocabulary consists of approximately 500 words and there are 400 locations to explore. Anticipation mounted as the two disks slowly loaded...

The object of Micro MUD is to become a Wizard - achieved by scoring 102,400 points. There are three ways to score; find treasures and drop them in the swamp, kill other players or perform minor tasks. There are two states of death: Dead Dead and Dead. If you are killed in a fight, you will be the former, and have to restart a game from scratch. However, if you undertake a particularly dangerous task without the proper equipment, the latter is your fate and you have to start again, keeping your characteristics but losing your inventory.

Initial delight was instilled by my being allowed to alter screen colours, text window size, default commands and enter my individual persona. However, the smile soon faded as the first screen of text scrolled upward before I could read it and the game proceeded to play with itself. The booklet provided mentions a 'real time' element but gives no hint as to the speed of other characters' actions. I found it difficult to go anywhere or so anything without being attacked by Gobo, Nigel the Necromancer and Uncle Tom Cobbly et al. It took great presence of mind to persist.

As soon as my next attempt began, I did what no Harlequin should do - I took to my heels, hoping to get to a location not so infested with inhabitants intent on my destruction. Moving west and south revealed a stick (wow) and brought me to a cemetery and eventually the grave-digger's cottage. After exploring for a while and discovering how inadequate the parser was - it does not understand EXAMINE or LOOK AT - I was informed that the game was about to reset for some reason. Deciding that I had had insufficient time to evolve a decent game-character, saving my position seemed pointless. I watched as it reset and sent me back to the start - although I did get to keep my hard-earned strength, dexterity, stamina and score. On my third attempt I managed to get to the mountains before Jon the Necromancer magically summoned me to his presence and proceeded to deplete my stamina and strength with his sword - I was unarmed. Game four began...

I discovered a wood cutter's hut containing nothing but space on the wall for a moose head. Not finding this particularly helpful I left for the grave digger's cottage again. This time I found something interesting: the bookcase in the study had been pushed aside to reveal a passage. Sticking my head inside confirmed that I would need a light of some kind to explore it safely.

Remembering the stick, I dashed back to its location, picked it up and took it to the fire roaring in the grate. The instructions clearly state that an item may be put inside an object, logically therefore, shoving the stick into the fire should get it to burn, thus providing light for the dark passage. Another of the game's limits made its presence felt as the wooden stick refused to light or even be put into the fire.

Just as I was contemplating moving on, I was summoned again... this time by a Necromanceress who took great delight in trying to end my adventure with the sharp end of her sword. I, as yet still unarmed, eventually fled. 'Eventually' because the time between my input of 'FLEE EAST' and the action being carried out was around 30 seconds, during which time I watched the evil female kick the stuffing out of me. This game was quickly becoming embarrassing.

My next discovery was a tethered goat. I united it and entered GET COAT to which I got the reply I TAKEN. My inventory still showed nothing except that the game has a distinct lack of attention to detail.

The text descriptions are sparse, consisting mainly of possible exits. The object descriptions are minimal and character action and interaction is frustrating. One can spend minutes watching the screen scroll pages of text concerning who has just left the location, who has just arrived, who shouts what and who hits who.

Micro MUD is tedious, boring, frustrating, non-atmospheric and bestowed with an inadequate parser - an adventure to be avoided.

An adventure to be avoided... Tedious, boring, frustrating, non-atmospheric and bestowed with an inadequate parser.