﻿ Legend Of The Amazon Women (US Gold) Review | Crash - Everygamegoing 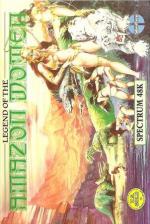 Lady Wilde and her infant daughter are the only survivors of a plane crash. Waking up, concussed, in the middle of the Amazon jungle, Lady W realises that her daughter has been kidnapped by Amazons, and she sets out to rescue her child.

Driven on by her maternal feelings, during her quest Lady Wilde has to enter into one-on-one combat with a series of Amazon warriors, dodge high and low flying arrows and nasty spikeballs hurled out by vicious plants, and contend with dragons. Setting out with little more than a leotard and a club, she makes her way across a large scrolling landscape split into ten zones. Ms Wilde can't move through the landscape unless she kills each and every Amazon Woman who bars her path and there's no shortage of pugnacious tribeswomen...

Your heroine can walk left and right as well as jump and duck, and she has three fighting moves in her repertoire. The Chop delivers a mean overarm blow to the bonce of the opposing warrior if she is in range, while Thrust aims the weapon to the midriff and Slice is a ducking, hacking move. To begin with, the Amazons are armed with clubs, but after zone four they turn up with swords in hand, and the girls in zones eight, nine and ten are axe-wielding madwomen. Lady Wilde can swap her weapon for that of a vanquished opponent, but the exchange seems to be mainly cosmetic you don't appear to gain extra reach or power from different weapons.

The top third of the screen is devoted to a scrolling radar system which reveals about three screens-worth of the landscape in miniature, below which icons representing Lady W, her opponents and jungle nasties are displayed. The Aggressive Aristocrat appears as a chunky arrow containing the number of lives she has remaining, while the Amazons appear as slender vertical arrows. Spikers nasty plants which hurl energy sapping projectiles are also shown on the radar, but dragons are impervious to the scanner and pop up without warning in the last four zones.

As in Fighting Warrior, arrows whizz through the playing area, zooming across the screen at head height and ankle level. Contact with an arrow or spiky vegetable projectile, like a biff from an Amazon's weapon, reduces Lady W's energy reserves displayed on a horizontal bar under the radar. Each Amazon enters the fray with lots of energy bar which has to be worn down before she'll die co-operatively, and allow the heroine to continue on her quest to rescue darling daughter.

During a scrap, both combatants gain a little energy if they rest, but just to make the rescue mission that bit more tricky, Lady Wilde is up against the clock. If she doesn't get to the end of a zone within the four minute time limit she loses one of her four lives. Points are won for each blow landed, for killing an Amazon, avoiding an arrow or spiky projectile, and for killing dragons. At the end of a zone a bonus of ten times the number of seconds remaining on the clock is added to the score. Killing an Amazon earns a bonus of ten times her intelligence level. Intelligence level? The inlay states that the Amazon warriors have 'floating intelligence', set according to the level on which they appear. This means the further you get into the game, the smarter your opponents.

Should you fight your way through all ten levels of the game, Lady Wilde is reunited with her offspring and a happy ending ensues. Are you woman enough to enter the jungle?

'Oh dear! Another fighting game. If it was full of new ideas and new moves I wouldn't complain, but it's a simple variant on the theme. The attacking moves are very limited, and really aren't good enough when compared to the sixteen moves available in most beat em ups. The graphics are quite neat, and the women are nicely animated but the game seems to lack some of the addictive qualities that should be there. Taking everything into account, it's not a bad game, but after a while the challenge begins to wane and boredom sets in. I think it's a bit too similar to other fighting games to be anything special'

'Legend of the Amazon Women strikes me as a sort of Fighting Warrior, starring women, and not too impressive at that. The game has nice graphics with a few spot beeps but it's nothing out of the ordinary. I found this game as unplayable as Fighting Warrior and the game idea is even more boring - every woman I came to fight was the same as the last. Sometimes they had swords, sometimes axes, but there still wasn't enough variety to keep me attached to this game -even if there was a load of long haired women running all over my telly. Nothing special, overall'

'While there are a few neat touches in this game, including the smooth parallax scrolling and time limits to complete each level, taken as a whole Legend is nothing special. Sometimes the characters blend into the background, making life a bit tricky. The way in which the characters lope across the screen is strongly reminiscent of Tir Na Nog, while the scrapping sequences reminded me of Fighting Warrior. If you're into beat em ups, this is another one for your collection, but otherwise it has little to offer.'

If you're into beat em ups, this is another one for your collection, but otherwise it has little to offer.