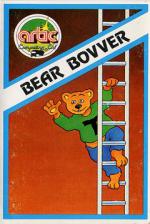 If you've seen those ads with a cheery bear hanging off a ladder with a T on his shirt, you may have wandered what it was all about. Well it turns out to be Artic's latest game, possibly their best yet. Ted is thrilled - he's just taken delivery of a new Sinclair electric vehicle. Unfortunately the batteries don't last very long. The car stops beside a building site, where there are three large shiny batteries for the taking. Unfortunately there are also three nasty Bovver Bears roving the ladders and platforms as well as a green dinosaur (scenarios get odder and odder, don't they)?

The object of the game is to get Ted out of his car, up the scaffolding and knock the batteries down on at a time and into the car. A battery descends one platform when Ted walks through it, killing off a bovver bear if one should be underneath at the time. It's only a temporary setback however - they soon reappear. Once a battery is in the car, Ted can get in again and drive forward to collect the next battery. To help him on the scaffolding there are some time bombs which can leave behind to blow up a bovver bear (temporary again, sigh). Clearing the screen results in a different layout and four bears. On each screen drink appears in the form of milk, beer and other beverages - it's thirsty work. Oh - and of course, it's worth avoiding bears or dinosaur - they kill.

'This game is very enjoyable and addictive. Artic say the graphics are of 'cartoon quality' - a statement which turns out to be fairly true! The animation of the bears is incredible, and the sound is very good with well known tunes played at any of 4 presettable volumes. Excellent.'

'At times, the bears in this game can be utterly infuriating, ganging up on you so you can bearly get out of the car. The detail and movement of the bears is amazingly well done. Other details appeal too, like the explosions when you squash a bear under a battery, or blow one up with a time bomb. Even the transmission drive shaft on the car revolves. As each screen gets cleared there are more bears - on the third a white robot-like creature resembling Twiggy from Buck Rogers joins in. It all gets very heavy! Frustrating, challenging, addictive - great!'

'Addictive and fun to play - maddening in fact. They include a 'Baby Bear Mode' for training purposes, but once you get down to the real task in hand it's very difficult. The graphics are excellent, really excellent, so are the tunes. A fine game - one of Artic's best.'

A fine game - one of Artic's best. The graphics are really excellent, and so are the tunes.