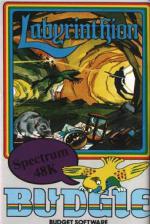 Remember when Ultimate meant Play the Game, not Deja Vu? Remember how we all thrilled to Atic Atac and went wild over Sabre Wulfe? As the Ashby team went 3D, out came Wizard's Lair from Bubble Bus - sort of Wulfe in the Atic. It was immensely playable and cheaper than the Ultimate titles.

The process of evolution being what it is, the inevitable result of this progression is now a cut-price Wizard's Lair - a Wizard's Studio Flat, if you will. Its title is Labyrinthion and it's set in a labyrinth - which shouldn't a-maze you.

There are nine parts of a scroll scattered around the screens and it's your task to pick up the mystical waste paper. The maze divides into five sections and to pass from one to another you'll need a number of objects - four compasses, maps, water bottles or hour glasses. Delivered to the drop point these will make a key appear somewhere within the sector and that will open the necessary doors.

Inevitably the caves are alive with nasties. For protection from frogs, rats and the rest there are fly swatters, buckets and mouse traps and you also have two weapons to defend yourself against the strength sapping vermin. Weapons can be replenished from the fill point and changed with thef key.

It's a busy scenario but it over-reaches itself. If this had been nice and simple it might have provided a pleasing diversion. As it is, it's often confusing'and difficult to get into with a horribly unclear status panel.

When it eventually crashed I wasn't desperately surprised and certainly felt no desire to reload. If evolution is survival of the fittest, this review is an obituary.

A reminder of the old Ultimate Atic Atac days. Now that kind of things sells as budget material.

A game that's often confusing and difficult to get into with a horribly unclear status panel. When it eventually crashed, I wasn't desperately surprised and certainly felt no desire to reload.