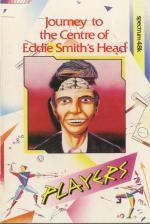 Journey To The Centre Of Eddie Smith's Head | Overall Summary

Journey to the Centre of Eddie Smith's Head is the first adventure I've seen from Players, Interceptor's budget label. I'm sorry to say that future releases are going to have to be rather better than this.

The plot of Eddie Smith is fairly simple. To cut a short story even shorter, Eddie Smith, nuclear scientist, has gone bonkers after hitting his head on an atomic bomb big enough to destroy planet Earth and now intends to use it to do just that. You have to search the laboratories and city where Eddie worked to find a way to defuse the bomb and save humanity.

The program is not particularly clever either when it comes to interpreting commands. True to some extent of just about every adventure, but this one seems to be more obtuse than is really necessary. For example, right at the beginning of the game, if you do an inventory you'll find you have a 50p piece and a 10p piece, in addition to a magic ring. When you managed to reach the toilets, you'll find a locked stall. "Ah ha!," you cry, "I must spend a penny!" - or rather 10 pee, because that's all the program will accept: neither 10p nor 10 pence will do, it has to be pee. Funny joke.

Again, when you've found the gun which is hidden in the toilet, you don't seem to be able to actually shoot anyone with it. Eddie, who turns up right at the beginning of the adventure, just stands there and lets you try. Obviously, he knows more than you do, and the program won't let you. It was only later that I thought of typing in Pull Trigger but by that time I'd lost the gun and any inclination to go back and find it.

Eddie, by the way, seems singularly innocuous. He'll let you search his laboratory without any complaints. The little old man past the coffee machine is another matter entirely - just try and touch his invention and he'll tear you apart, necessitating a restart.

By the way, the coffee may be the answer to a rather nagging little problem you will face - thirst.

That's basically it. Unoriginal, unexciting and not very challenging. At £2.99 it's OK if you're an adventure buff with a rainy day to fill and nothing else in the cupboard, and it might make a reasonable first adventure, but there are far better budget adventures around.

A derivative and dull adventure. Knock it on the head, Eddie - even as a budget release.

Journey To The Centre Of Eddie Smith's Head | Overall Summary

A derivative and dull adventure. Knock it on the head, Eddie - even as a budget release.