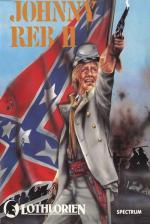 If you're a wargames fan, then I can wholeheartedly recommended Lothlorien's latest - Johnny Reb II. It's a great little game.

I admit I approached this particular program with some trepidation. Lothlorien games have never particularly appealed to me in the past. It turns out, though, to be uncomplicated and challenging, with enough options to provide a considerable playtime. Play is either against the computer or a human opponent.

To begin with, the historical background. It's the beginning of the American Civil War. Everybody's got nice shiny uniforms and guns, and they're raring to try them out. The Confederate forces are advancing on Washington and a smaller Union force is deployed at Bull Run to stop them.

The actual battle was a disaster for the over-confident Union forces - now it's your turn to try to rewrite history.

Ignoring the set-up menu for now and on to the game proper. The screen is divided into two parts. On the left is a window which scrolls around the battlefield giving you detailed information on where troops are, what the terrain is like and so on. The map graphics are good. If you shift the window about the battlefield you can see that the Union forces are defending a bridge over a river. The river runs top to bottom of the battlefield, and a road runs from left to right. The Confederate player scores by leaving the battlefield on the right; the Union player scores by halting the opposition. Also on the map are woods, hills and houses. Houses and woods are good for hiding in. Hills mean you can fire over people.

Finally, you can also see various unit icons: black figures drawn on fairly large squares, about four characters to a side, grey for the Confederates, blue for the Union. The figures depict what type a unit is - man with a musket for infantry, man on horse for cavalry, wagon for supply train, cannon or artillery - and also what the unit is doing at the moment. For example a man with a levelled musket means the unit is firing. Musket at high port means the unit is advancing, etc.

When you've moved the on-screen cursor over a unit, either using keyboard or joystick, you can get details about it. Below the map window, you get the name of the unit, and then a list of categories - type, strength, ammunition, morale and experience. How high a unit rates in each of these categories is effectively shown by a colour code; green is usually good, grading down through yellow to red.

When you've got the cursor over a unit icon, you can give orders. Hit the Order Key/Fire button and, to the left of the map window, you get information on what that unit is doing now. Hit it again, and you get the various different icons for the actions that unit is allowed to perform. Now use the joystick to choose the one you want it to do next, and hit fire. If you order an advance or charge, the game will ask you to show on the tactical map, using the cursor, where you want the unit to advance or charge to. Likewise, if you tell it to fire at something, you have to move the cursor to show where.

The units will actually perform their orders on screen. One which is firing will fire (little bangs from the Spectrum), then reload (the icon changes to show a figure reloading a musket), then fire again. Rather a nice effect. Obviously, if you fire at something you hope to cause casualties. You can only give orders to your own troops of course, and if you put the cursor over an enemy unit you can only get the most basic information.

You can also access a strategic map, which is two screens wide: this shows you where all the units are on the battlefield, although you can only see what side they're on, not what they are.

I played with the basic default game against the computer as the Union commander responsible for the defence of Washington against the Rebs. The computer took the role of the Confederates.

I didn't have any idea at the beginning of the game what the control keys were so my outlying pickets were overwhelmed before I could give any orders. But let me tell you, once I'd assumed the reins of command I gave those Rebs a talking to! it wasn't long before I had them running off the battlefield. OK, so they were running towards Washington and the Confederates had managed to score well over 300 to my 126, but those are minor details!

As a final nice touch you can add new units, defining strength, type, morale and placing them on the battlefield or defining where they come on and when. You can also add new features to the battlefield; fences, stone walls, and extra houses. These all make it easier for the Union forces to defend: to compensate for this the Confederates get bonus points.

Johnny Reb II is one of the best three wargames I've seen for the Spectrum (the other two are Arnhem and Desert Rats by CCS).

It's well presented, and terrific fun to play. I hope whoever wrote it had the sense to create an authoring system, because I'm going to be clamouring for more.

A winner for the strategy gamers. Smoothly programmed, easy to get to grips with.

A winner for the strategy gamers. Smoothly programmed and easy to get to grips with.