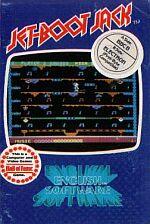 Jet Boot Jack, from English Software, is a game which involves you as Jack, adorned with multi-coloured breakdancing garb and headphones, picking up musical notes in a factory. Your aim is to amass the greatest music collection of all time.

The scenario is relatively simple. Whilst taking the musical notes hanging from the ceiling, you have to dodge under various monsters and pieces of the factory's machinery whilst navigating a series of lifts which travel up and down at regular intervals. The main problem is that Jack has to keep an eye on the fuel levels which keep his boots sufficiently powered in order for you to move him around.

At higher levels in the game there are conveyor belts which, unless you are very careful, will result in either Jack bashing his head against the very low ceiling or being inexorably pulled into an empty lift shaft, where, if you are lucky, you can just about Jet Boot out in time to avoid the lift squashing you. If you're able to get past that, then there are plenty more screens with more monsters, more lifts and lower ceilings to bash your bonce against, with even less time to duck down.

As the screens become progressively more difficult and (naturally) you end up either out of fuel or out of lives, you are given the choice of starting at the lowest level or any level up to the highest you were able to achieve, so you don't have to endure the first five levels in order to get past "that green thing that hangs down in front of the lift" to get onto the next screen.

Jet Boot Jack is in many aspects a typical lifts-and-ladders type game. Screens are very colourful with some good music, although it does become repetitive after a while; unfortunately, there is no sound on/off switch which is a shame, nor is there a pause facility, the game is fast and responsive and the typical ZX controls are already accepted as a standard layout. If you make a complete hash up of a certain screen, you can press Escape to go back to the title page, but you have to endure half of the music before you can go back to where you want to go.

The many colours and varied screens make for an amusing and relatively easy to play game, the instructions are easy to understand, and is fully documented in both the game and its packaging.

Initially Jet Boot Jack is similar to Chuckie Egg and Killer Gorilla but there is some strategy involved as you have to make sure Jack's boots are sufficiently powered, and that he doesn't stay still for too long. In short, a colourful and simple game and enjoyable to play.

A colourful and simple game and enjoyable to play.