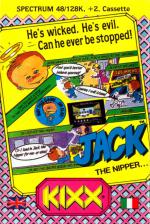 Gasp, this goes back a bit. It's a fair old time, in fact, since the sequel to this ripsnorter, so it must be ages since the original. When you bear in mind that there was a cartoon series running in YS based on Jack The Nipper before T'zer became Editor (in the long, dark days of the Cox regime), you begin to realise that this is one seriously old game.

It's good stuff, though. Jack's tired of all the wimps in his town and their goody goody ways, so he sets out to cause mayhem. It's up to you to make sure he's as naughty as possible without being caught and given a damn good spanking (ouch). So you must jump on things, pick them up, use them, drop them, fire at things with your peashooter and toot the horn at the cat. Every time you do something relatively naughty (and it's up to you to work out what you should do to whom) your naughtyometer goes up.

That's it really - there's great fun to be had as you run around creating havoc, although the game structure isn't perhaps as tight as in the sequel. Graphics are impressive, with a neat sense of perspective, and the whole is fast and furious. Overall, a bargain at three nicker, so what are you doing sitting there? Go buy it.

Graphics are impressive, with a neat sense of perspective, and the whole thing is fast and furious.