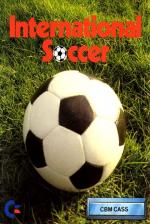 First released on cartridge in 1983 by Commodore, CRL have now made International Soccer available on cassette and disk. Adopting a grandstand view of the action, the game incorporates many of soccer's rules and tactics.

Before the action begins one or two-player mode is chosen; opting for the former allows one of nine computer skill levels to be selected: the first plays like a dummy, but the ninth passes to pixel perfection. In addition, one of five different coloured strips is available for both players.

A match is played on a two-way horizontally scrolling pitch approximately three screens wide. The two halves are 200 seconds long, at the end of which the winning side is presented with a cup; if the result is a draw, neither side is awarded the trophy.

Seven players make up each team, including the goalkeeper, who is controlled with the Fire button and automatically jumps in the direction the ball is kicked. One player is controlled by joystick at any given time, with eight-way movement possible according to the direction he is pushed. This player in possession turns to a lighter shade of his team's colour for easy recognition and moves at a slower rate than the surrounding players.

The opposition player (usually) nearest to the ball also turns a lighter shade; the other players on both teams run in patterns in their appropriate zones, related to the ball's movement. Tackling is carried out simply by running into another player (no fouls are awarded).

Pressing the Fire button kicks the ball; additionally a footballer heads the ball if it's at the correct height. If the ball goes out of play, the computer selects a player to take a throw in, goal kick or corner kick, and the Fire button continues the action.

Even though Matchday II is graphically better, more intelligent and more wide-ranging, this still offers greater playability. Its bad points are only minor: the computer's selection of who's the nearest player to the ball is sometimes annoyingly arbitrary, and the goalkeepers aren't up to much (but at least they provide plenty of humour when they dive in the opposite direction to the ball).

The graphics are blocky and the scrolling slightly jerky, but the player movement is surprisingly nifty, and some fairly complex moves can be strung together. You need a bit of practice to get properly co-ordinated, but it's worth it just to experience the satisfaction of tubbing the computer on level nine.

It's not brilliant, but it's still the fastest footballing simulation on the C64.

Matchday II may be far more complex and much better looking, but when it comes to speed and playability, International Soccer is tops. First impressions are off-putting since the footballers are very blocky and the sound is rubbish.

However, when the whistle blows you soon forget about those deficiencies and really get into the action. Control is surprisingly crisp, and it's easy to put together some neat moves.

The game isn't without its flaws, like the computer giving goals when a shot is clearly over the bar, and the occasional odd player selection, but on the whole International Soccer provides a fast, challenging and thoroughly enjoyable football simulation that shouldn't be missed.

I'm pleased to see this seminal soccer game make its return to the software shelves. Four and a half years ago it impressed me and it's arguably one of the minor classics of Commodore computer gaming.

Still, time waits for no sports sim, and what was masterful back then is starting to look slightly clumsy now. The player sprites are chunky, the goal detection routine lets in shots going over the cross-bar, and the player select is not without its faults.

In spite of all this, though International Soccer remains a remarkably playable game, its nine skill levels and two-player option bringing hours of footballing fun. It may lack the sophistication of something like Match Day II but it plays quite a bit faster and is much easier to get into. It's just a pity it isn't cheaper.

Graphics 40%
Blocky sprites and simple backdrops are rescued by the fast movement of both.

Hookability 85%
If you're not discouraged by the graphical presentation, there's a lot of fun to be had from the rapid action.

Lastability 92%
Nine computer skill levels and a two-player option mean that you can pick it up any time.

Overall 86%
Despite a few minor faults, it's still the quickest and most playable football game on the C64.

Despite a few minor faults, still the quickest and most playable football game on the C64.