﻿ Infiltrator 2: The Next Day (US Gold) Review | Zzap - Everygamegoing 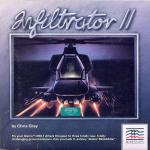 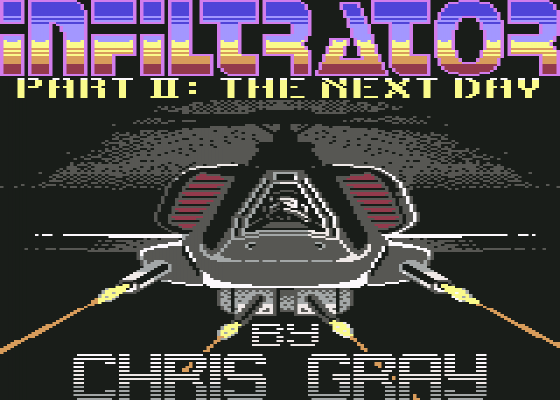 After successfully accomplishing that mission, Johnny's life had lost all its challenge, until he was informed of the re-emergence of the Mad Leader and his fiendish cohorts. Once again, Johnny prepares himself to become... The Infiltrator.

Each of Johnny's three missions is split into two parts - a helicopter flight 'simulation' followed by ground installation infiltration, but chopper-shy adventurers can begin play in the second half of mission one. 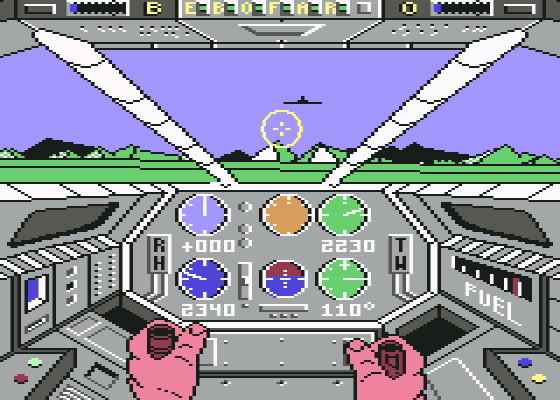 After taking his seat in the Gizmo DHX-2 attack helicopter, the player peruses the plethora of instruments before him. These comprise the standard flight-sim items, such as altimeter, airspeed indicator, artificial horizon, tachometer and compass/direction finder. On take off, this last item is fed a value given by the flight computer so the pilot can be given a prompt as to which heading to turn the chopper to. The computer terminal screen also shows a map of the area and reports on helicopter systems damaged by enemy fire, for the Mad Leader's forces are also airborne and are looking out for infiltrators.

Jet interceptors which could belong to allies, enemies or just plain psychopaths frequently fly past the DHX-2. Unless Johnnie wants to engage in battle, contact has to be made with the other pilot to determine whose side he is on. If his codename gives him away as an enemy, Johnny needs to send back the enemy call-sign OVERLORD, while allies should be given the call-sign INFILTRATOR. In the event of a dog-fight, the DHX-2 is armed with cannon and heat-seeking missiles, and makes use of chaff and flares for defensive purposes.

When the player reaches his preset destination, he lands (carefully) and starts on part two of the mission, the object of which is to penetrate security and access an item vital to the Mad Leader's plans. The screen shows a bird's eye view of each part of the base complete with minefields, buildings and guards. Johnny is dressed as one of the Mad Leader's lackies and has some forged papers so that he can walk through the base almost unhindered. Should he get too close to a guard, though, Johnny may be recognised and asked to identify himself, which can lead to his capture if a flaw is spotted in the papers. 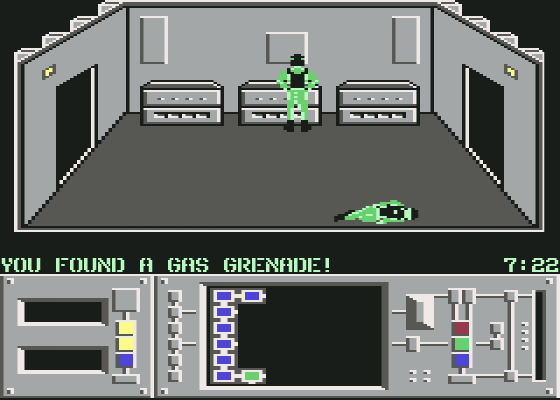 To avoid a premature end to his lifespan, Johnny also carries a sleeping gas spray and a set of gas grenades to stun guards, as well as a mine detector to help him negotiate booby-trapped areas.

Walking inside a building changes the display to show a perspective view of each room around which the player moves Johnny, avoiding patrolling guards and searching furniture. Filing cabinets contain useless and useful items, ranging from bottles of vodka (which make Johnny rather confused!) to extr gas grenades or security passes (to open the doors to secret laboratories). The player keeps track of what Johnny is carrying on an inventory screen which also shows the number of grenades and the amount of sleep-spray remaining. Below the location view is a map of the building which gradually builds up as progress is made through the labyrinth of rooms.

Once the installation has been thoroughly infiltrated, it's time to run back to the chopper and take off for home base, where Johnny will no doubt be informed of the Mad Leader's next fiendish plan which only one man can stop... and we all know who that is going to be. 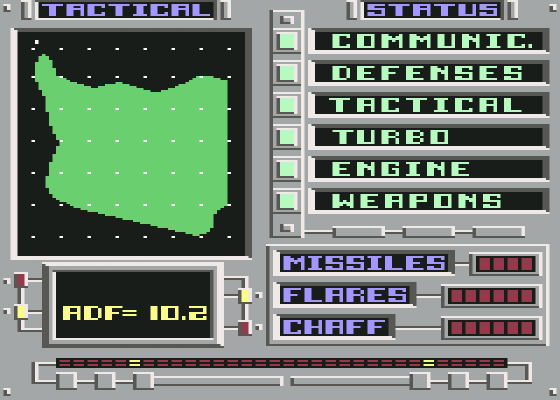 I wasn't all that keen on Infiltrator (mainly because I bought the cassette version), and this isn't any real improvement. Admittedly it's a lot harder and provides more of a lasting challenge, but visually and aurally there's very little difference.

The graphics and sound are more or less lifted straight from the original, but at least this successor has retaiined the same appealing line in sarcasm (though even this wears a bit thin after a couple of unlucky captures).

Apart from the multi-load, the presentation is decent, with the option to start directly on the second stage being a particularly good idea. The only real fault is with the gameplay: the missions aren't overly varied, and the stages within the missions aren't very exciting - much the same problems I found with the original. 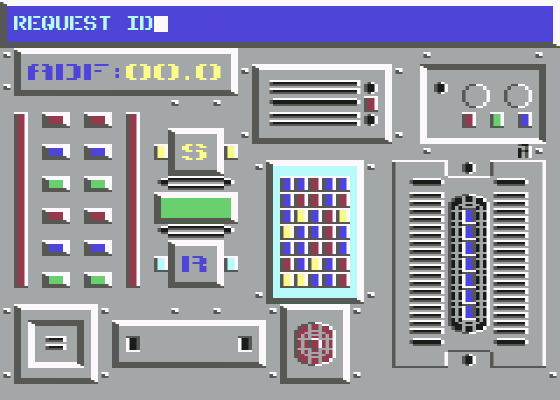 If you haven't seen either version, then this package could be worth a look; if you've got the original and didn't find it too hot, then steer clear.

At first I thought I'd loaded Infiltrator I by mistake, but on further play I discovered that it *was* the sequel... much to my disappointment. The original Infiltrator was pretty good when it was released a couple of years ago, but it's now looking pretty dated.

The sequel is virtually identical, with only a few minor changes over the original. The game has a nice sense of humour, but for me boredom set in very quickly - I saw it all two years ago. Those who don't have Infiltrator in their collection might find this package worth the money - they're both enjoyable arcade adventures - but otherwise I'd give them a miss. 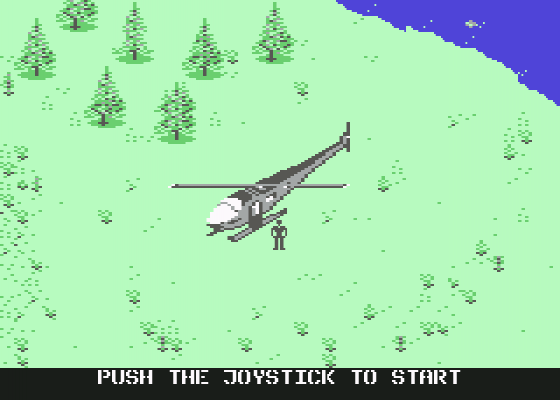 The first thing to strike me about Infiltrator II was the exact similarity between it and its predecessor. In fact, if it weren't for the new missions being quite a bit harder, I would have said that there would be no point buying this game if you already had the first.

The difficulty level is set too high and after several frustrating hours at the joystick, I still couldn't finish mission one, due to sheer bad luck. Because guards are placed randomly in rooms, one can be standing right by the door as you enter a room, so you have no chance to avoid death if the alarm is active.

The first mission, which requires the player to find which of four laboratories contains the chemical to neutralize a vat of nerve gas, is marred by the fact that the contents of the laboratories change between games, and only one chemical isn't conducive to the game ending. Of course, all this means starting the mission again... Aaagh! 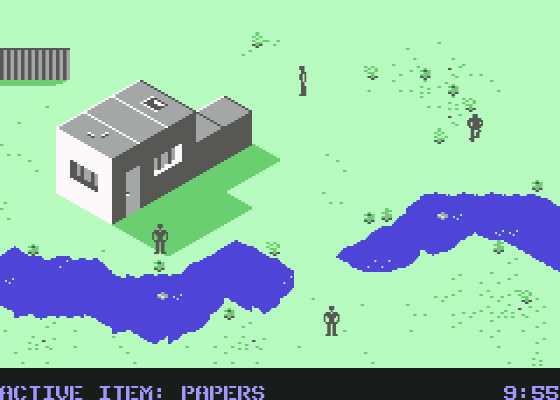 Presentation 72%
Good overall presentation with the major exception of a long multi-load.

Sound 39%
Not a lot, apart from mediocre sound effects.

Hookability 71%
The idea of a combination of flight-sim and arcade adventure is compelling.

Lastability 51%
Lots of infiltrating to do, but the frustration element quickly induces a cerebral haemorrhage in the player.

Overall 61%
A sequel which only differs from the original in its missions being much harder.

A sequel which only differs from the original in its missions being much harder. 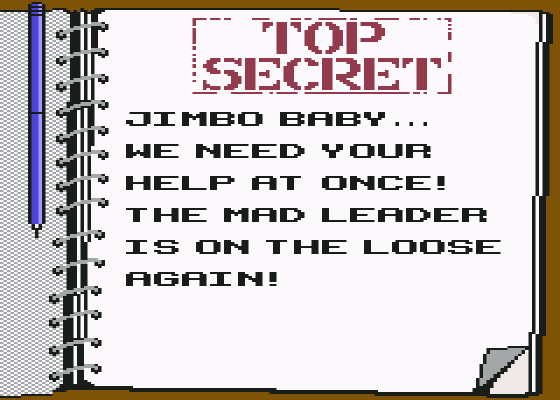 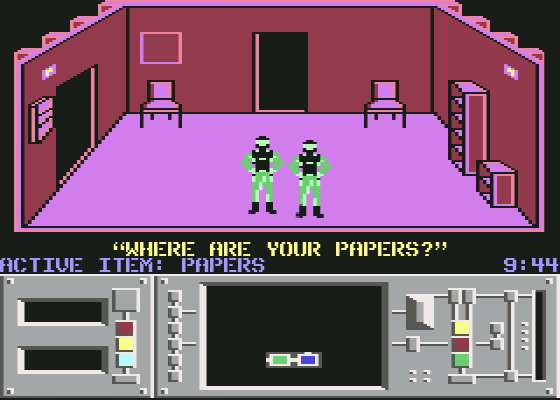 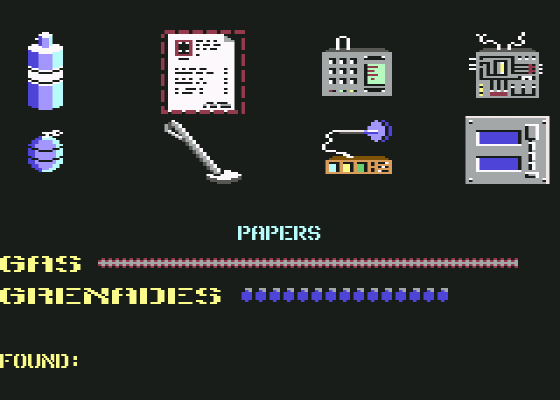